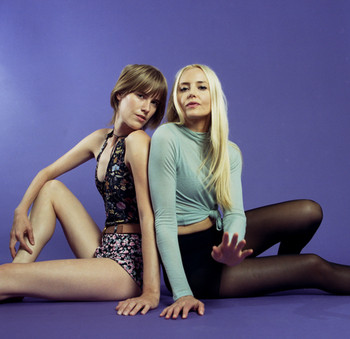 Brooklyn’s Fever High are back with more infectiously danceable tracks to spark some joy in your life. Today, they released their brand new Avec You EP. This four-track EP from multi-instrumentalists Reni Lane and Anna Nordeen features production from Adam Schlesinger (Fountains of Wayne, Ivy) who produced the duo’s 2017 album FHNY and their 2016 debut EP All Work.

Stream or Purchase the EP:

The title track “Avec You” was praised by Atwood Magazine, who said the song “is at its heart so simple, yet it makes you feel infinite — like you are dancing through the streets of Paris, bathed in moonlight” and Line of Best Fit said “Fever High oscillate on their axis between dance-pop and post-punk.” “Avec You” was featured on Spotify’s New Music Friday and Indie Pop playlists upon release. Fever High have also found fans in places like Billboard, NPR Music, BlackBook, Bitch Media, The New York Times, The Guardian, and Interview Magazine who described the group’s sound as a “fizzy blast of electro-pop.”