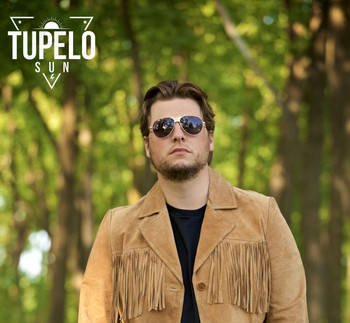 Tupelo Sun’s passion for music came after a trip to Graceland with his Dad and older Brother when he was 13. He threw himself into the music of Elvis and drew inspiration that still motivates him today. His name Tupelo is in homage of the musical great who has inspired him to pursue music.

During his first year at College, at the insistence of his peers, Tupelo daringly surrendered to his calling and jumped on stage during an open mic night at the College campus. It was then that he realized
that the flame that he had ignored for so many years still burned within. During his performance at the open mic, Tupelo flashed back to his early years often playing the video game “Rock Band”. Backthen, at the age of 14, is where Tupelo imagined himself performing before a live audience. It was at that very moment that Tupelo finally believed that he could do this. As luck would have it, following his performance, Tupelo was approached by a Producer who was interested in working with him, after a few hang outs they decided to create an album together. This validation gave Tupelo the sense that this was something that was actually tangible, and it made him feel that he could do this and do it well. Tupelo recently stated, “ever since that chance encounter, I’ve been working my hardest to make the best music I can so that I can share my personal perspectives with the world”.