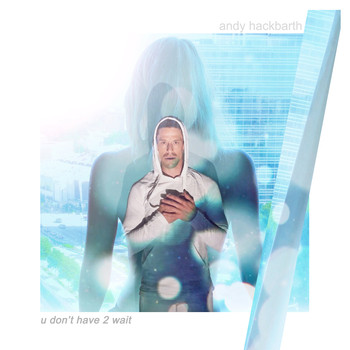 “To me the compelling thing about U Don’t Have 2 Wait is its honesty and simplicity. It’s a song about two lovers, yearning, separated by distance but together in their thoughts and dreams. The music video needed to be equally simple, but visually stunning, with a focus on the contrast between “real life” and fantasy. The trick with simple videos, especially those without a concrete plot, is how to keep the viewer’s attention for the full length of the song without a storyline to engage them. Luckily for me, one of my closest friends in Nashville, Vince Romanelli, is, in addition to many other things, a gifted tech guru and stage lighting whiz. He had recently built a projection mapping studio in his basement, and when I decided U Don’t Have 2 Wait would be the first single off of the Sex Robots EP, I immediately thought of him to help me create the “dream” sequences. During a long night of trial-and-error practice takes, marked most noticeably by my un-usable awkward improvised dancing, we finally pinned down a few segments I was happy with.

Editing proved to be more difficult than I had planned, particularly matching the flow of backdrop colors and patterns from take to take. Vince did a wonderful job building the visual cues to match the song’s uncharacteristically-late climax, and I tried to mimic the song’s slow build in my dancing as well, which was challenging for someone with no training. I wasted a lot of time by being self-conscious, and in retrospect, a few shots of tequila before the shoot would have been well worth the investment!” – Andy Hackbarth