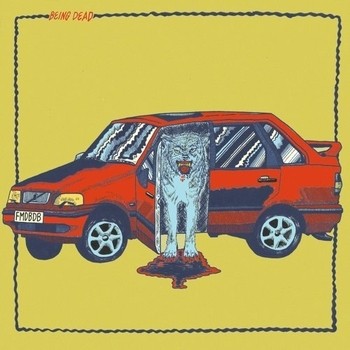 Men stand half naked in a field, their pale white torsos superimposed within the frame of a camera lens. A robotic voiceover wants to know but one question; Do you want to go to the prom with me? Suddenly, we cut away to a luxurious scene – a Guru, being fed by said men and a handful of women, situated in a field that they have all to themselves. Psychedelic-tinged melodies come over us from the background, dragging us asunder into the world of a red-tinted Devil. This Devil is busy ruling over a hellish, sinful dominion that stands in complete contrast to the Guru’s very being, and she’s taking plenty of pleasure in doing so. All this is about to change though, as she comes to the conclusion that their coexistence can no longer stand. This is the video for “Apostles’ Prom,” the incredible new single from experimental rockers Being Dead that has got critics and fans abuzz this winter. The music is restrained, bizarre and the antithesis of boring streamlined pop, but as anyone who checks out the video will see for themselves, few artists know how to rock the weird side of life better than Being Dead do.

The Devil emerges from the ethers to confront the Guru as we progress towards the middle of the music video, and before we have a chance to guess what could possibly be coming next, the two polarizing demigods have assembled armies to attack each other. As the sides approach the battlefield, it quickly becomes evident that there’s something blatantly wrong with this picture. Despite standing on opposing ends of the spectrum in every way, shape and form, the two are bound together by their horse-adorned clothing, jewelry and trinkets. This love of a galloping, beautifully simple beast seems to wash over the tension on the plain like a soothing rain over a forest fire, and the desire to go to war melts away with the echo of the bass. The two sides embrace each other in a carnal show of affection that is reminiscent of Free Love but is at this point removed from the bohemian constraints of midcentury psychedelia.
As the light begins to fade, all parties considered form a tribal cluster that speaks to the raw, unfiltered kinship of humanity. A man beating a drum to the pulsating vibration of the music conjures a stampeding flyover from mystical airborne horses, whose arrival also signals an unexpected and violent explosion of the people on the ground below, synchronized perfectly with the ebbing of the central melody. “Apostles’ Prom” is, put simply, a brooding and provocatively ambitious lo-fi single that owes nothing to the current dominant trends in pop culture other than its wistful grasp of surrealism, which is endearing and yet, at times, can be hostile and unforgiving. Their sound is truly their own, and the music video that they’ve made to support this song is unquestionably one of the most fascinatingly textured I’ve reviewed in the last year. Smart, sophisticated and devoid of any self-righteousness, this song is a jarring masterpiece if I’ve ever heard one.