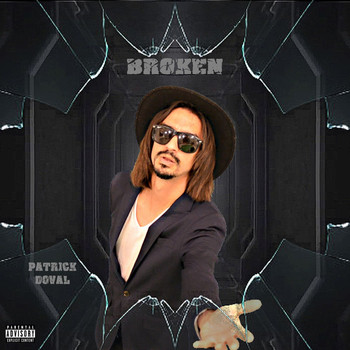 The material on Patrick Doval’s newest full length release Broken, spanning eleven songs, deals with weighty themes and concerns, but Doval never sounds broken. Instead, the collection is surprisingly exultant despite its rather complicated mosaic of moods and that redemptive feeling is present from the first song onward. “Rose” whips Broken up to a rousing start without ever overwhelming the listener and the bulk of its success comes from the potent marriage of Doval’s voice with cracking guitar work. He segues from the guitar-centric slant of the opener into a more overt pop sound with the second track “In You” and the undiluted exuberance of Doval’s voice finds another worthy musical partner in the romping, yet tasteful, piano playing that lays down the track’s initial rhythm. Even when the full band joins, they merely complement those first building blocks, but the track nevertheless stands out as one of Broken’s finest moments.

“Paris” has a sleek, streamlined thrust forward, never getting carried away with itself, and hinges in the end on the quality of Doval’s singing. Keyboards in the song’s second half never water down its impact and one of the album’s abiding strengths, the vocal melodies, hits one of a handful of zeniths with this effort. It is impossible to resist the slow soulful drag of “You Lied to Me” as Doval orchestrates it in such an artful and intensely musical fashion you never feel like it is too heavy handed. The lead guitar near the song’s end provides a tasty final touch for listeners and shares the same melodic values we hear throughout Broken’s entirety. Despite the gloss of the title song’s electronic arrangement, the album’s songwriting themes receive one of their clearest statements in the lyrics for “Broken”. His approach to songwriting remains the same, even with a radically different sound, and it helps provide a sense of unity with the album as a whole.

“Imaginary Friend” breaks out the guitar again in a big way, but Doval never restricts himself to a single approach for any song and there are significant synthesizer contributions helping to shape the song’s character as well. The riffing, however, stands out on an album where such tropes come at a premium – and it stands out for all the right reasons. Doval layers it with just enough distortion to color the playing, but never lays it on so thick that it threatens to overwhelm listeners. “Broken Girl” sticks with listeners thanks to sporting one of the album’s strongest choruses, high praise indeed on a release brimming with such moments. His lyric writing is quite strong here, as well, and betrays no sense of Doval’s creativity tiring late in the release. It isn’t one of those albums where the artist buries their weaker tracks in the second half, just before the ending. Broken is consistent throughout. “Tears” ends the release on a slightly surprising note with Doval relying on nothing but his words, voice, and acoustic guitar to finish Broken. The song is cut live in the studio and the unflinching bravery of Doval performing in such a way pays off big for listeners. The entire album is a reward for anyone who finishes it; Broken glows with unique individuality and cuts through the din of modern life to give us musical moments we need.