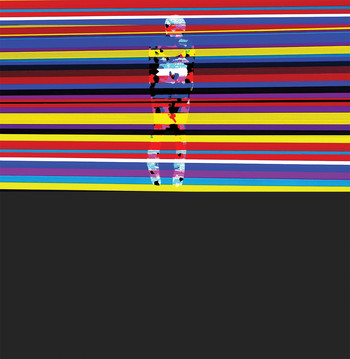 Rigidly arranged drums color the opening bars of the song “Mind Blow” as we enter the hollow, chilling grounds that Terryfirma, the new album by Terry Ohms, makes it home upon. It doesn’t take much time before Ohms slides into focus, penetrating the robotic beat of the drums with his signature vocal stylings and lightly irreverent attitude. This stretch of subtle musicality is just a primer for the blistering tone of “Bring All to Front,” where Ohms finds a grating groove and slowly transforms it into a juggernaut of a club track if alternative rock’s ever heard one. This isn’t the only abrasive modulation we’ll be making in the next hour – Terryfirma’s twists and turns have only begun.

Blustery feedback greets us at the door of “Peaks and Valleys” and gives way to a bright melody that is among the slickest I’ve heard in a rock album since Skyfactor’s A Thousand Sounds. “Doubtin It” is a little more coarse and unrefined, but dispenses a fiery set of strings that ensure our entrapment inside of their gargantuan gravitational pull. For every conservative dimension that there is to be explored in Terryfirma, there usually ends up being a staunchly liberal one to balance it out and create a sense of equilibrium among all the musical pandemonium.

The single “We Love You” arrives at the halfway marker of the album with a handful of electronic swing-beats that would normally seem completely out of place and colorless in any LP that didn’t bear the Terry Ohms moniker. In this setting though, they elevate a somewhat clunky club song to a more provocative level of detail and erudition. In the shadow of the spinning “Those Eyes” it becomes even more engaging a number, as the sixth track of Terryfirma exploits obtuse psychedelic rhythms for all their worth.

If you’re able to survive the churn and burn of the intrepid “Those Eyes,” the punk rock angst of “Remember How to Live” will be waiting for you on the other side to smack you with another fat-handed serving of adrenaline. It’s not the evocative, new wave-inspired tour de force that “Opportunity” is, but it keeps the album flowing really well all the same. “Little Bit” brings Terryfirma to a somewhat anti-climactic conclusion, but when analyzed through the lens of experimentalism, this record ends on an even stronger note than it starts out on.

Terry Ohms, who goes by Wes McDonald when he’s not ripping through a space aged rock riff or crooning his way through an ocean of manipulated feedback and boisterous basslines, takes his sound to the next level with Terryfirma and imparts to us the finest work yet in a career brimming with accolades and accomplishments. Out of the southern underground, he’s risen to the spotlight of American indie rock and has never stopped developing his craft to suit the soul within his creative ethics. Terryfirma is required listening for all who consider themselves to be keen on thought-provoking, well-rounded pop music, and I for one think it makes an otherwise dull January a lot more interesting to say the least.