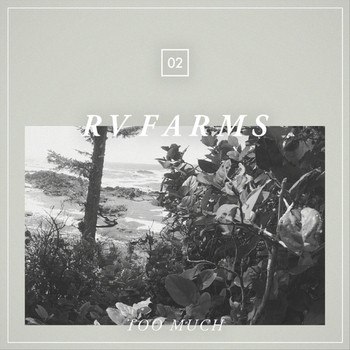 A galloping beat stutter-steps as it comes into the spotlight, hesitant of its place in the forefront of the dynamic mix that brings RV Farms’ new single “Too Much” out of the silence and into the full-bodied warmth of our stereo speakers. A synthesized melody ominously skirts the line between dissonance and sheer unadulterated ambience, interrupted only by the pulsating drums, which pummel away with a reserved attitude that suits the mood of the atmospheric intro perfectly. Like a heart beating so reticently at the very thought of finding its other half, the percussion slowly gives way to the vocals, which wash over everything in the song with a brilliant, fragile opulence that is at once beautiful and yet torturously gripping. The words seem to fall through the cracks of the mix, slipping into the little spaces between the instruments, fleeing from our reach as we approach the chorus and are left with only the strut of the bass and the remains of a velvet-soft crooning. “Too Much” might be the most ironically titled song of the year, as the reason why it’s so devilishly addictive from the start is simply because it avoids the greatest pitfall of modern pop music – literally doing too much.

The chorus has a drunken recklessness about it that is auto-corrected by the studiousness of the lyrics, which swirl around in a kaleidoscopic fashion as we gallop into the breakdown around 3:16-3:18. There’s so many elements crashing into us at once in this single, in slow motion I might add, that absorbing the sonic impact at full force becomes as much a part of the listening session as getting lost in the verses does. You can tell from the get-go that there’s a lot of unspoken emotion here, and even a taste of enigmatic storytelling that has been manipulated into a palatable, melodic version of itself meant to fit in with the postmodernity of the music. As much as it wants to be, “Too Much” is never so highbrow that it’s able to shed its unquestionably sweet pop sensibilities, which in my opinion aren’t what keeps it from being the experimental rock masterpiece that it should be, but what make it the stylish pop anthem that it already is.

As “Too Much” fades away in a tizzy of stampeding percussion and dizzying electrified notes that cascade from our speakers and assault us with colorful textures of an avant-garde variety, it becomes quite clear that this Edmonton, Canada-based project fronted by the one and only Dan English has evolved so much since the 2016 debut EP Pale that the music generated under its name can no longer be classified as alternative pop so easily. There’s shades of everything from folk music to post-punk and even electronic pop in the studded grooves that formulate the crux of this single’s content, and personally I’m very intrigued to see what English does to develop and cultivate this staggeringly zany sound even further than he already has. This is an exciting time to be a music fan, and it’s songs like “Too Much” that are making it so.