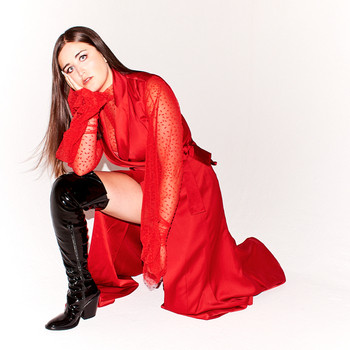 Bristol born vocalist and songwriter Lauren Aquilina has delivered the release of her brand-new single, ‘If Looks Could Kill’, the punchy follow up to recent comeback release ‘Psycho’ – a production made in the wake of Lauren’s 3 year hiatus.

Written by Aquilina and frequent collaborator Lostboy (who has previously worked with Nina Nesbitt, Liam Payne, Gabrielle Aplin), the lyrics of ‘If Looks Could Kill” continue to explore the sinister side of heartbreak, warning an ex of the lethal potential of jealousy.

Famed for her honest songwriting and piano-led ballads, Aquilina soon amassed a loyal fanbase thanks to a trilogy of formative EPs. Supported by BBC Introducing, The Line Of Best Fit, Popjustice, and The Independent, this chapter of her career saw her hand-picked by Taylor Swift as an opener for her iconic tour titled ‘1989’, and culminated in the release of her debut album ‘Isn’t It Strange’ through Island Records in 2016.