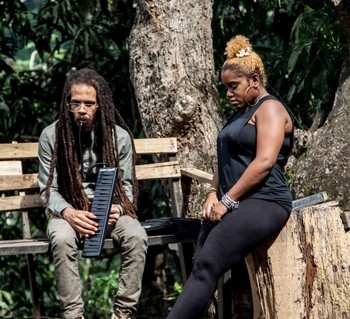 Addis Pablo is a melodica player and composer from Jamaica. The son of the legendary Augustus Pablo, Addis and his sister Isis carry on their father’s musical heritage being in charge of their Fathers Estate, creating events such as the Augustus Pablo Tribute in Jamaica and contemporary art exhibits by Isis in Japan.

Addis following in his fathers footsteps has been producing his own music since 2008 and touring globally for 6 years, his debut album titled “In His Father’s House” was released in 2014 and was received world wide with high ratings. The project featured other Jamaican artists such as Exile Di Brave, Earl 16, Prince Allah, Chezidech, and more. Some of the his other projects include Suns of Dub x Walshy Fire Major Lazer Mixtape (2013), Sizza x Suns Of Dub “Jah Jah Solve Dem” (2014), and Suns of Dub “Far East Mixtape” with Mighty Crown (2015), and his most recent projects “Majestic Melodies” mixtape (2017) and the
Majestic Melodies Ep (2018)

Addis’ tours have taken him through out the world delivering his father’s music and memory to his father’s fans as well as delivering his own music to a new generation of fans. He has toured throughout Europe, The UK, The United States , Hong Kong, Singapore. Malaysia Indonesia and Japan. He has opened for acts such as Inner Circle,The Mighty Diamonds and Earl Chinna Smith. Addis has been featured on major international reggae festivals including Garance Reggae Festival, Reggae Jam, Reggae On The River, and Uppsala Reggae Festival in Sweden.