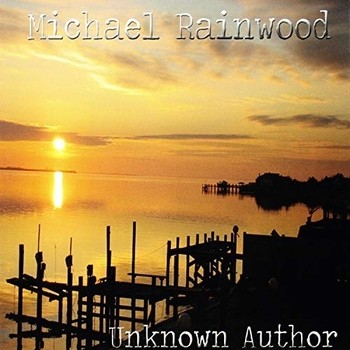 The gentle picking of an acoustic guitar is accompanied by a gilded rising melody in the background as we enter “I’ll Never Be Alone Again,” the new single from gospel singer/songwriter Michael Rainwood’s album Unknown Author. Like strands of light streaming through a window in the morning, the harmonies awaken and become vibrant and full of life when Rainwood starts to sing, churning us with his stoic words tempered under the warm timbre of his voice. He sings of loneliness and utter isolation and suddenly being saved by a figure on a white horse. “Just hold on tight, you’ll never be alone again” he was told, and trusting in these words Rainwood found himself an eternal friend in none other than Jesus Christ and the song that their bond would inspire.

Feeling alone isn’t always a product of being by yourself – sometimes we’re at our most alone when we’re in a crowded room full of people that we’re reticent to open up to. Michael Rainwood discusses this feeling openly, as well as his urge to weep at the very sight of rain and past fears of losing his mind completely to the madness of everyday life. These lyrics are intimate, surreal even, but they’re not existing for the sake of our singer’s ego. We soon find the chorus, and within its poetic verses we meet the cathartic release of the single in the form of a bold confession. Rainwood is turning himself over to his friend Jesus, and feelings of loneliness are no longer something that he finds himself the victim of.

A crash of the cymbals gives way to a new identity for the acoustic guitar as we press forward. The strings rattle and reverberate against the thick, rich drumming, which by itself isn’t all that exciting but when blended into this mix is quintessential to the vibe Rainwood is creating with his lyrics. “I’ll Never Be Alone Again” is literally built around a singular melody that is broken down and reconstructed three times over the course of the song. The first movement is hesitant; the second is a bit arrogant and boisterous, and the third is evenly distributed and designed to overstate the depth of the guitar. As deceptively crafted as this fascinating arrangement is, there’s not a shred of filler to be sifted through in this song. Michael Rainwood is a cerebral songwriter and the polar opposite of a charlatan lacking artistic integrity.

As we slip through the refined cracks between the beat and the vocal/guitar harmonies that shape the mood of the song as we near its ending, Rainwood’s singing becomes much softer and deliberately muted. His earnest approach to the lyrics in this latter part of the track is perhaps the most moving portion of the entire single. You don’t even have to be a Christian to get a grasp of what he’s trying to say here – his heart is pumping as much love as it is blood, and this epic expression of emotion is incredibly touching no matter what your personal beliefs are. Michael Rainwood is undoubtedly as devoted to his medium as he is to his God, and this new single arguably highlights both sides of his personality better than anything he’s previously released has.

The music of Michael Rainwood has been heard all over the world due to the radio plugging services offered by Musik Radio Promotions. Learn more – HTTPS://musikandfilm.com