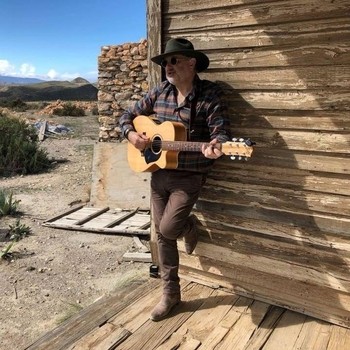 A gnarled string arrangement draws us ever so close to the macabre wonderment that is the opening stanza of Steve Bonham and the Long Road’s “The Girl with the Rattlesnake Heart,” their latest and arguably most jarring song to date. A wistful, fleeting groove wanders around the guitar like a thief in the night, watching closely as the riff ebbs and flows in robotic synchronicity. Bonham’s singing is the only comforting element to be found here; the music is threatening and larger than life. We’re tempted to cut and run but too enamored by the lyrics to go anywhere as the quaint opening gives way to the unforgiving guts of the song.

These strings are pendulant, but they aren’t lazy – they’re tightly wound and deceptively follow the beat wherever it goes in this track, and us along with it. Bonham skirts his vocals around their unpredictable twists and turns, which come close to breaking the harmony in half a couple of times but mercifully allow it to spring back into place once we hit the chorus. For being a single, “The Girl With the Rattlesnake Heart” has an epic, anthological feel to it, sort of like we’re listening to a condensed medley taken from a much grander jam session.

Steve Bonham sports a very strong vocal attack in this song, even more so than in previous efforts. He’s venomous in his transmission of the poignant verses and aggressive in his recoil from the rustling of the percussive parts. Bonham doesn’t blink in this song; he’s constantly two steps ahead of the rest of the band emotionally, cratering the melody with a dark lyricism which creates a fetching contrast that the track wears wonderfully. The experimental edge of this song is sharp enough to make avant-garde listeners giddy with excitement, but it’s not so over the top that more casual fans would resist its charms.

This mix is incredibly even, to the point where trying to decipher which instrument is doing what isn’t difficult in the least. The bottom end is sort of jazzy in how it sweeps up the floor for the drums to come cascading through, while the guitar is impatiently boisterous and full of a vibrant conceitedness that is tempered by Bonham’s smooth vocals. Any other equalization of the band would have muffled the grandeur of this composition, which from where I sit appears to be calculated and mathy despite its fluid delivery in the track.

Steve Bonham adds another gem to his burgeoning discography of nuggets with “The Girl With the Rattlesnake Heart,” and I think his group’s hardcore disciples will be pleased with what it has to offer more than anyone else. Bonham has already demonstrated how affectionate and observational he can be in previous works, but here he’s showing us how cutting and unruly his songcraft can get, especially when there’s nothing to get in his way. This is a great moment for him and the Long Road, who from the start have been on the cusp of breaking into the mainstream and are poised to do even more in the wake of this single’s success.

Steve Bonham’s music has been heard all over the world due to the promotional services offered by Danie Cortese Entertainment & Publicity. Learn more here – http://www.daniecorteseent.com/