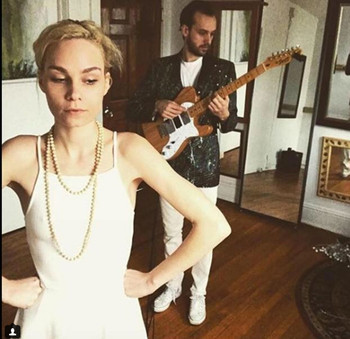 Reliant Tom is to music what New York is to humanity’s pulse: power, snyth, rock and roll and constructed mayhem. Bad Orange, the nine-track juggernaut of sound, is an alternative rock-pop mastery. In other words, make sure Reliant Tom is on your musical radar. At times you will feel your listening to something from afar, only to realize that the modern lens to which we all listen, bends our interpretations.

Comprised of Claire Cuny (vocals, electric guitar) and Monte Weber (synthesizer, keys, bass, electronic drums and production), Reliant Tom is (naturally) Brooklyn, New York-based. They are at the center of it all, and the limelight and buzz shows its influence and resilience in each of the tracks from Bad Orange. The pair has a tendency to heighten riffs and measures, the sound waves drill past or even over Cuny’s smooth vocals. Her voice is just as stoic at times, thrilling the listener all the same.

I found little evidence of cunning attempts from Cuny or Weber to convince the listener they were more, er, reliant on technology and bells and whistles. On the contrary – Reliant Tom encapsulates the modern necessities of honesty and futuristic sounding musical beds. While listening to such gems as “Alien,” “SOS” and even “Someday I’ll Be King” the white noise quickly transitioned to an epic battle of synthesizers and crushing rock guitar riffs. Heck, Hans Zimmer’s musical score to Blade Runner 2049 could have used “Alien” or the title track in its arsenal.

Lyrically, songs like “Happy Birthday” leave the listener in very human state. “On a sunny afternoon, I’d rather hole up in my room,” Cuny’s voice meanders. Somehow as a listener, that connection to self-awareness and feelings of depression make life seem less lonely and starved for attention. The band doesn’t sing about this, but applying the modern lens viewpoint, why is that we can wish strangers (even though we’re Facebook friends) a Happy Birthday, but we can’t even leave our bed some days? That feeling of wearing a mask – putting on a different attitude- came to mind. These songs make you think and they take you down roads you might not want to cross. Cuny’s cooler-than-you rock goddess is well placed –she’s just a bit darker compared to the luminous Debbie Harry voice, but she encompasses the confidence of Chrissie Hynde and adds more artistry to music than the pop-rock singer, Sydney Sierota from Echosmith.

Weber’s choices on where to bend the beats and leave the listener with white noise is never bothersome in all nine tracks. In “String” the music bed drips and beeps along, pinging back and forth in your inner ear. Previously, though, in track two, “Alien,” the choice to create a warm, ambient sound rather than a dark, black hole-like sound felt strangely like home. The song sounded like it might feel very foreign and standoffish at first, but yet, it culminated in a comforting movement.

Overall, I just really found Bad Orange to be a stellar collection of songs. What the songs lack in happiness or a feeling of joy, Reliant Tom compensates with real art and bursts of mini electrical storms. They ignite the senses the same way The Faint, Bjork, Radiohead do and then some. Bravo!