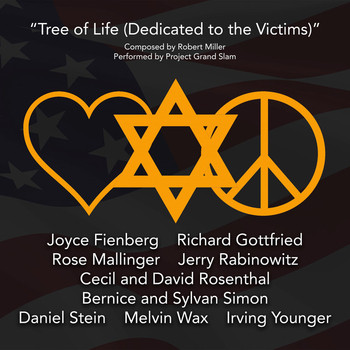 The single “Tree Of Life (Dedicated To The Victims)” by Project Grand Slam, aka PGS, is a plea for peace, sanity and gun control in the wake of the recent mass shooting at the Tree of Life synagogue in Pittsburg on Oct. 27, 2018 and California mass shooting. The song was written by Robert Miller, leader of PGS, and is performed by band members Ziarra Washington (singer) and Baden Goyo (piano). Miller’s hope is that the song will help the nation to heal from this tragedy and all the other senseless gun related tragedies. All the proceeds from this song will go to the families of the victims.

Washington and Goyo turn out excellent performances in the studio on this melancholy track penned by Miller, and it’s a truly compelling work. It’s dedicated to the victims and delivers a maximum statement on-the subject of gun violence. It not only meets the PGS standard, it goes above and beyond it in its own way, with the words going the distance with the delicate piano accompaniment following. It asks the obvious question, and that is “why are all these guns here?” But rather than carry on about the political climate, it’s more about an opinion of the music delivered for this charity.

Words like “we must find a better way, today” is the brilliant common sense approach the song takes and Miller nailed it with his excellent songwriting skills with an understated but very powerful message. And while it might seem a little cold and bare, that’s one of its many strengths because it hypnotically draws you in by that minimalism and gets the best out of the listener. Washington’s vocals are second to none and Goyo’s piano is perfectly complimenting. Together they all achieve the goal to bring awareness to the cause and it’s no surprise that it’s getting attention.

If you’re not moved by such a song, perhaps other ways to effectively get the point across can be found but music has healing powers, so it’s always recommended for a way to peace and tranquility. Not everyone agrees and that is also a sad shame in today’s culture, but if there’s a better way to contribute to this cause, it should be action based somehow and Miller does the business right in that regard. It’s only fair to say that they’re doing their civic duty to help raise awareness and donate their efforts in the best way they know how.

You can’t deny the awesome power music can have on people, and there’s nothing wrong with kicking down for it this way, as both the artists and consumers equally contribute to a cause worth turning around however it can be. This track can very well motivate you to stand up and take matters more seriously and produce positive outcomes no matter how you slice it, and it’s a win-win for everyone involved. It’s safe to say that when you feel the pain, your loyalty will follow, and your money’s worth will be had by this remarkable song of hope.

The music of Project Grand Slam has been heard all over the world due to the promotional services offered by Danie Cortese Entertainment & Publicity. Learn more here – http://www.daniecorteseent.com/