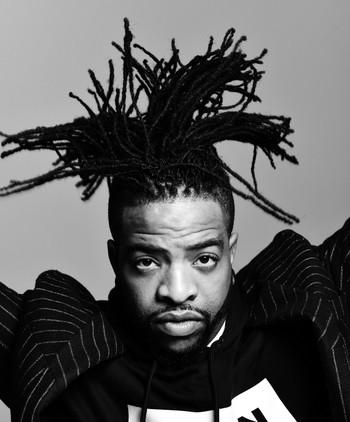 A beating kick drum pushes and shoves its way out of dim silence, resisting any attempts to smother its bold march as it grows larger than the scope of stereo audio can even capture. Voices rise from the ethers and seep through the echo of the percussion. Suddenly we collapse with the rhythm and slip into a neon-colored funk that is being directed from behind an electric guitar. Rich vitality is everywhere around us, but there’s a sense of yearning that we can’t seem to get away from. Without warning DR King announces in his signature honey sweet voice “Awaken my spirit,” and like a magician whispering a secret spell he draws us into a trance that won’t be easily broken. Enter “Gravedigger,” the brand new single from DR King (written alongside producer Marc Swersky and veteran writer Brielle Brown), and you will experience R&B as it was always meant to be heard; raw, unvarnished by big league gloss and topped with an emotional grip that is as soulful as anything the genre has ever delivered.

The wall of sound that smacks us in the face around the appearance of the first chorus is as mighty as a twister, and effectively sucks us into the vortex of melodies emanating from the sleek bass line. DR King haunts the grey space between the drums and the strings, intercutting the rhythm with his determined vocal and keeping the band from running off the rails with intensity. Controlled white noise is one thing, but this single is devoid of any strokes of atonality. The instrumental parts chase after the lyrics in the first stanza as if to say “don’t leave us behind,” and King reacts with a sly, charming shift in tempo that allows them to catch up just in time to lower the boom in the chorus. Kelly Clarkson’s mentorship of this young man is evident in his amazing agility, which mirrors the American Idol winner’s own in more ways than just his vocal execution. Together they’ll make for an interesting bill this January when they hit the road on Clarkson’s next headlining tour, and I hope King makes this song his deal-sealing closer.

As much as the instrumental players give us shockingly focused grooves in “Gravedigger,” DR King is the undisputed star of the show in this track from the time he starts to sing to the moment the song retreats into the dark silence from which it came. What’s nice is that although this song is fodder for any crowded nightclub playlist, its message is so much more intelligent, on point and relevant to our modern times than anything else you would typically find when engaging with the city nightlife. King isn’t trying to be just an R&B singer; he wants to be a force of change and an influence over emerging acts who are a lot like he was prior to joining the 14th season of NBC’s The Voice. This single goes a long ways towards cementing his reputation for accomplishing what he sets out to when he enters the studio, and it’s another fine addition to his growing catalogue of intimate pop recordings.