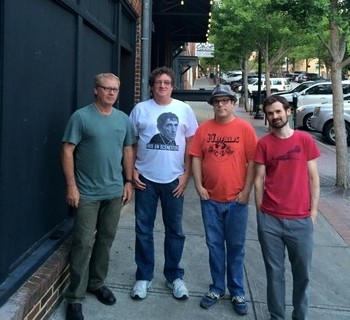 We are so excited to be here today on Veterans Day to get to hang out with Mythical Motors out of TN. The guys are riding high after releasing a new album, ‘Elevated Levels.’ These guys make great music and they look like fun to hang out with too, so lets do just that!

We just released a new album called Elevated Levels. It contains 22 songs, and is available on CD, cassette, and digital download from Bandcamp.

The album was mastered by Todd Tobias, who has worked with Guided By Voices, Robert Pollard, and Circus Devils. He did a great job of improving the overall sound quality, while still maintaining the rough around the edges feel of the album. We record everything at home in my basement and sometimes in our garage practice space, so it was great to have the input of someone who has worked with some of my absolute favorite bands.

@skopemag: Got any music posted that we can stream and check out?

Elevate Levels is our 11th full length album. Over the years, we’ve also released three singles, and three EPs, including two EPs that were just released earlier this year. Our entire catalog of 17 releases can be downloaded for just $22.50 on Bandcamp, and is available here:

You can also find us on Soundcloud and Spotify.

My favorite songwriter is Robert Pollard from Guided By Voices. His influence is extremely wide-ranging, and he inspires virtually every song that I write in one way or another. Some of my other influences include Neutral Milk Hotel and the Elephant 6 Collective, The Cleaners From Venus, Bevis Frond, Wire, R.E.M., The Beatles, Big Star, and The Who.

I also make handmade paper collages, which we often use for our album covers. Jesse Treece is a big influence on my work, as is Robert Pollard’s collage work. Several of my collages can be seen in a video that was made for our song, “Concentric Circles” from our 2017 album The Life Stage.

The video can be found here:

More of my collages can be found on our Instagram page: https://www.instagram.com/mythicalmotors/

@skopemag: How do you test whether your new song is a keeper or not?

If I I think a song has a good melody, it’s usually a keeper. Some songs will get stuck in my head even when I haven’t listened to them in a while, and continue to grow on me over time. That seems like a good sign to me.

@skopemag: How much time per week do you devote to music & social media marketing?

I try to write as much as possible, and usually work on new music for a few hours 3 or 4 times a week. We’ve been working with a publicist to secure premieres and reviews for our two most recent albums. So, I’ve been less busy in the promotion department, but I still spend maybe an hour or so a week sharing any press that we receive on social media.

I record everything at home, usually late at night. I’ve been writing since I was 14, and I’ve always felt most inspired and creative at night.

I try to keep a list of song titles and fragments of lyrics, which are a constant source of inspiration for new songs. Lately, some of my songs began as a Capella compositions that I recorded on my phone. Later, I took these melodies and lyrics, and assigned chord progressions to them in order to complete the song. It’s been a nice method – quick and easy.

Elevated Levels was just released last month, but I’ve already made significant progress on the next album, which will be released sometime next year. You can find us on Facebook, Bandcamp, Twitter, Instagram, Soundcloud, and Spotify.