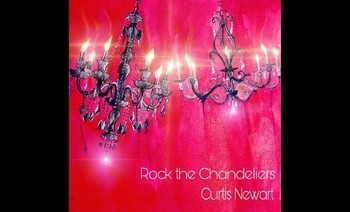 Curtis Newart has been a musical genius since the early part of his life with several music projects and other art projects. His first album titled “Exploits in A modern World” was released in July 2006 and was on the top charts for a while. He continues his music career with this new single “Superhuman” is off his album “Rock the Chandeliers which contains eight songs to rock to this summer.

Curtis is known for his fantastic singing and song writing abilities which are done in a signature manner that is easily recognizable. Listening to “Superhuman” has a nice vibe to it that is both modern and classic. Curtis makes music in the electronic pop genre that still carries his unique style that has been developed over the years.

The production was done by Immaculate Records which is owned by Newart and is one of the best music productions that I have had the pleasure of reviewing this year. His vocal performance on the track is at par with what you would expect from the new wave pop idols like Depeche Mode. The excellent song writing, and vocals make “Superhuman” a vibrant and energetic song. Add the beautiful lyrics and mastering and you have a great unforgettable melody that sticks to you no matter how many times you play the song. That’s how you know that Curtis Newart is really talented.

There is a lot of work that went into “Superhuman” and you can get attached to the song quite easily. In fact, the melody in the song is exhilarating and gives you a rush that can only come from legends of electronic pop like Tears for Fears. The lyrics are also very deep, emotional and soulful. You can easily relate and bump to this track many times with clarity and fun. Curtis Newart sometimes reminds listeners of REM and has succeeded in providing a sound that stands out from the crowd in a world where there are so many variants of sounds to go around.

“Superhuman” is a terrific song, easily enjoyable and a fresh mix of pop and electronic music, delivered with amazing vocals and mastered by true perfectionists in the industry. The final result is a song that is an embodiment of the artiste, fun, vibrant and a nice ride from beginning to the end.

Curtis delivers his lyrics with a sincerity that you makes you believe in the theme of the song and the uniqueness of his sound profile. “Superhuman” is already looking like another successful venture by Curtis Newart and an indication that the album is worth purchasing and enjoying.