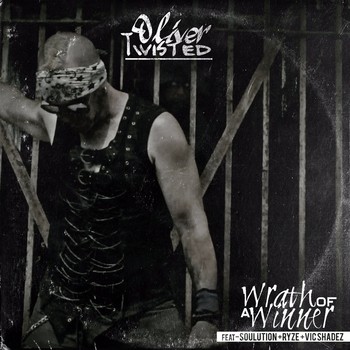 “Wrath of a Winner” will definitely surprise people. The self-billed hip hop performer Oliver Twisted mixes both rap and straight forward vocals during this song while relying on a fully realized arrangement far more dependent on traditional instrumentation – guitar, bass, drums – than a pre-programmed drum track and ornamental synthesizer lines. There definitely is an electronic presence in “Wrath of a Winner” evidenced by some particularly creative keyboard and synthesizer sounds, but they possess real warmth rather than succumbing to the typical complaint that the electronic side of the song sounds icy and/or sterile. They practically have a classical air, often sounding more like slowly unraveling violin lines rather than synthesizer melodies, and complement the thoughtful quality behind both Twisted’s straight forward singing and his hip hop delivery.

He’s taken up playing guitar, as well, and the six string presence in the song fills the track with shades of color it would have otherwise lacked. The cut’s dominant instruments, however, are graceful piano elegantly gliding throughout the song’s entirety and Twisted’s voice. He has an astonishingly versatile vocal instrument. Much of the song’s first quarter is concerned with his actual singing, foregoing the hip hop side of his musical character, but holding back on that aspect of the performance makes it all the more meaningful when it finally arrives. He has an intensely rhythmic, yet emotive, hip hop delivery and it pairs up exceptionally well with his singing earlier in the track.

The lyrics are near confessional, but never overwrought. Twisted is clearly positioning himself as harboring the same ambitions of past musical icons, namechecking a number of classic bands and tunes, but it never comes off like empty boasting. Instead, Twisted makes his aims clear to listeners without ever sounding hamfisted. The writing is never self-indulgent; Twisted serves the song well by molding the lyrical content to the musical arrangement rather than super-imposing one over the top of the other. The near hushed quality of some lines and the post production effects shaping his vocal performance underline the dramatic importance of his message without ever sounding pretentious.

“Wrath of a Winner” makes it clear Oliver Twisted envisions himself in this for the long haul. He’s more interested in communicating with the audience than touting his self-importance and, despite the personal nature of his songwriting, anyone who has harbored big dreams will relate to his writing. There’s a message behind all of this though and it’s obvious when you give it a close listen – never stop believing in yourself and the only limits on our potential, ultimately, are those we place upon ourselves. This is an ideal title song for his album and lays out his path into the future with the sort of clarity we associate with great musical artists. Oliver Twisted’s “Wrath of a Winner” makes a positive impression from the first hearing and it only deepens with each new listen. He has the passion and skills to go far and anyone interested in accompanying him for the ride will, undoubtedly, be rewarded.