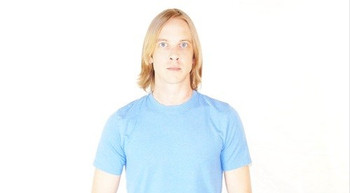 Matt Massey’s “Built” is a blast of punk rock energy. Its chorus states, “I’m built with broken pieces,” which is a unique manner of describing damaged goods. “Just like brand new,” Massey then concludes.

Massey sings the song with a gruff, rocker voice. He also sounds to have a bit of a chip on his shoulder. It’s as though he’s trying to make it clear how he’s not, nor will he ever be, perfect. Just as you are what you eat, so to speak, humans are the sum of their building materials. With its shouted, ‘hey, hey, hey,’ vocal part, it’s easy to imagine this song being song live. In fact, even its studio recording has a live feel to it. One can easily picture a small club filled with sweaty patrons, either shouting along with Massey, or slam dancing to the energy.

“Built,” sonically, is constructed with basic rock elements, which include bass, guitar and drums. Massey’s vocals are also treated in a few places with pop music sonics. The song isn’t complicated. It doesn’t change pace or melody much. Instead, it’s a straight-forward blast of energy. There is, however, a metallic electric guitar solo contained within.

Although it’s obvious we live in a dysfunctional world, populated by dysfunctional individuals, it’s nevertheless always good to get a reminder about this fact. “Built” is just such a timely reminder. You can’t expect a perfectly functional society, when such a collective is comprised of hurting individuals. Knowing this should give us more patience and should prompt all to show more grace. Not everybody has a forum like Massey, where he can let the world know about his natural inadequacies. We should think about this fact, however, before we jump to conclusions and lash out at others over their mistakes. There but for the grace of God go you and I, after all.

Complicated music can be a fun challenge to explore, but there are times when nothing feels better than raw simplicity. Matt Massey’s “Built” is just such an example of a song that’s not overly complicated. It’s intended to be played loud and is meant for you to shout along with it.