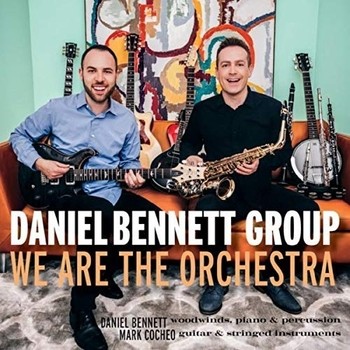 Daniel Bennett’s “We Are the Orchestra” is an 8-song EP of “Avant-Pop” compositions and arrangements of opera themes by 19th century composer Giuseppe Verdi. I wouldn’t know of any such opera composers, so the traditional arrangements can’t get any opinion of me other than to say it is worth noting that it can turn anyone onto it from Bennett’s project stand point. The arrangements are everything from bright and uplifting, to intensely entertaining and even humorous. The main idea is for Bennett to duel on brass with guitarist Mark Cocheo, both of which turn out excellent work together on this release.

The set kicks off with “Loose Fitting Spare Tire” and it’s a wonderful composition to begin with, but it really-only gets the proceedings underway for so much more. “I’m Not Nancy” is up next and obviously the title is all Bennett’s, but you can tell it’s structured in Verdi’s work. The guitar playing is immaculate Flamenco, a real treat to hear as Bennett solos on the flute in unison with Cocheo’s guitar, and what a fantastic piece it truly is. If you like guitar instrumentals, this is right up your alley, and the same can be said for Bennett’s flute playing.

“Gold Star Mufflers” seems to extend the theme of cars from the opening title, for whatever it’s worth. But the track itself is very rich with banjo and other textures that keep you completely interested as the disc wears on with what is essentially a straightforward smooth jazz rendition of whatever traditional components it’s made of. And it’s enormously satisfying to say the least. As where “Theme From Ernani” appears to be steeped in traditional arrangement and even slightly jazzier in the process. It’s all very well done, either way you slice the arrangements and fit them together.

“Refinancing For Elephants” is where some humor can be detected by way of the title itself, but it’s also where things get very complex and the disc becomes clearly aimed at the hardcore jazz and even folk music lovers. The outdoorsy arrangement keeps it tribal and organic, and this is definitely-where the peak of things happen. You’ll also love “Inside Our Pizza Oven.” But “Theme From II Travatore” is probably the most traditionally steeped sounding track, and also where they play some of the deepest music together and it really does come off like a small orchestra. By this time there is not one negative to find if you like all-instrumental music.

The disc seems to center some of the concept around cars in the humor of it all but it’s unknown to me if there’s anything more to that, but the sense of humor helps keep the over-seriousness factor from making it a stale listening experience. Instead they keep it fresh and amusing the whole time. The final track comes in the shape of “Carl Finds His Way” and you get the feeling a destination has been arrived at, and they take it out in world class fashion with one of the most intricately arranged pieces on offer. This is an absolutely-outstanding release with the perfect blend of playfulness and seriousness to ultimately satisfy on both levels.