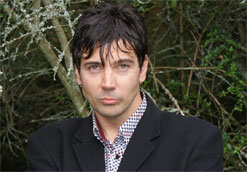 Dar.Ra is a rock and roll diamond in the rough molded in the shadows. The British invasion has taken over once again in the form of blazing distorted guitars and epic, cerebral songwriting. Exploding out of the garage and onto the freeway of dance music, his soul shines through, creating rock music with immediate impact and epic, cataclysmic hooks. Starting in the 90s, his craft has evolved but is still heavily inspired by this decade of experimentation. Free from addiction and worldly ties, the liberation of Dar.Ra is told from tales once kept as Dirty Lil Secrets – and such is the name of his latest EP.

His first rumblings started in London but Dar.Ra is now ready to share his artistic vision to the United States. Previously in multiple bands, he has now gone solo. He has consistently teamed up with longtime collaborator Harvey Summers. With 20 years under his belt as a producer, Summers seeks out new and interesting sounds that are both unusual and sonically daring. This multi-instrumentalist is passionate about originality in music and quality in sound and he certainly delivers on Dar.Ra’s records. In 2010 Dar.Ra released his debut album Soul Hours which was followed by Live 4 Love in 2015. A year later he released Battle Hymns which featured nuanced bass riffs and hard drum lines. Dar.Ra’s unique perspective pushed his pen to the top, exploring his writing abilities and accenting his production. He has also published a series of novels including Road Tales and The Night That Jimmy Died. Documenting his time on the road and the hardships of losing a brother, he’s written a new narrative for himself with Dirty Lil Secrets.