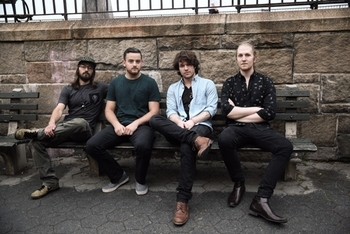 Rock singles in the 21st century seldom possess the punch and immediacy we hear with The Danbees’ “Down at the Bar”. This opening salvo from the New York City quartet’s second studio release, an EP entitled The Veggie Tapes, has a meat and potatoes approach to rock music that’s been missing from the scene quite some time and builds on the immense promise shown with their debut full length Fishnets Anonymous. The band’s trajectory is on the uptick for many reasons, but the biggest reason is that the band take such a time-tested slant on their music, yet set themselves apart thanks to the personal touch coloring the cut and the identifiably independent energy they bring to each second of this song. The Danbees are working within a tradition, yes, but they play like their own band and that “we owe nothing” attitude helps make their take on rock music all the more rambunctious.

“Down at the Bar” could work just as well as a live set opener as it might later in the set list and it’s easy to hear this studio recording while picturing a sweaty, wide-eyed throng of people pumping their fists and moving like a live electrical current has seized their body. The Danbees aren’t any sort of punk band, not at all, but they’ve picked up on the urban energy of their New York environs and brought it into their music without ever sacrificing their musical chops. Musical chops or not, there are no ego trips with this band. One never gets the sense that one or more members regard themselves as the leader thanks to the unified way they approach the song and no one attempts to dominate the proceedings.

They could. Guitarist Shane Matthews has an outsized presence on guitar that’s a perfect fit for the hard charging, raucous personality burning through every minute of the song. He veers between knuckle slashing power chords, barre chords, and fiery flashes of lead guitar sure to singe any listener too close to the speaker. Lead singer and primary songwriter Mark Slotoroff has a first class voice for rock songs with the sort of bucket of blood scream that hardcore rock fans might associate with icons of yore more than Slotoroff’s peers. He wrestles with and spits out the lyric with some nod to simple storytelling virtues and a swaggering attitude every bit as rock and roll as the musical backing. It’s a match made in guitar rock heaven.

“Down at the Bar” is a perfect way for The Danbees to introduce their new music to the world and if the remaining songs on The Veggie Tapes pack even half as much power then new and existing fans alike will be supercharged by the experience of hearing the band’s latest work. The Danbees are still making their mark, but songs like “Down at the Bar” show how much potential they have and how much they’ve already realized two releases into their career.