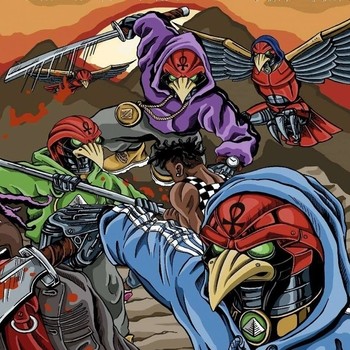 The Band Of The Hawk takes a dig at the weekly Fridays with a fresh track which is sure to allure a vast audience.

Band Of the Hawk, the hip-hop band, has gained immense popularity with their innovative creations launched over the internet media platforms in the past few years. Known for the talented musical wizard Noah Archangel, who forms a major part in the formation of the band, the group is a prodigy in the field of creative and fusion hip-hop style. Supported by an extremely versatile lot like King aka Yeaux Majesty, Ash Ra aka Houey Freeman aka Ashtonomics, P.Ey3, Grynd Seazon, NBRS and Juskwam, the band has given many successful and popular hits in the last few years.

With a new composition erupting every now and then, their fans and followers are never devoid of expecting and getting an avant-garde from them. With their newly developed project of releasing a fresh track every Friday of the week, they are generously attracting the limelight in the hip-hop lovers community among a grand audience and immiscible music critics alike.

With their last release, the very delightful King Midas, a unique composition by Yeaux Majesty, the band has surely established their stand among a huge mob of upcoming talent. With substantial rapping section and lightly organized background beats, this soulful track takes its audience into the mid-‘90s era yet keeps the modernized effect intact. The track is very ear-soothing with light heart-wrenching lyrics that keep the listener engaged musically and soulfully. The next track, Funktion, featuring STX and Yeaux Majesty, rolls through the fading harmony and evolves at a modulating pitch and edgy raps. Based on a tuneful rhythm the track allures the audience with its hearty words and well-structured tunes.

Free From Jazz glides through the tuneful vocals of Sage Majesty and makes its presence inevitable with its occasional and harmonious rapping sections. Vibrant yet distinct the words flow in an upbeat rhythm that is sure not to miss any music lover. Paving the path for the next week’s release, the track is one of the most entertaining and enjoyable tracks in the series. Noah Archangel brings back his instrumental series with the next single, Message From the King, that displays the audience the power of words and the soul of music. Opening over a light instrumental beat, the song takes quick riffs and the pulsating bass elevates the intensity of the already mystified ambience. One of its kinds, this track is a sure blockbuster.

Vita Rose’s debut with the band showcased by the next weekend track, Down the Rabbit Hole. Packed with overflowing energy and passion, this track marks the enthusiasm and potential of the talented member of the band. With light flowing musical association, the track is a sheer source of zest and vigour. Young World ‘18 rapped by STX is a solo portrayal of his powerful craftsmanship and artistry. Woven in the tunes of both traditional and modern musical notes, the track is a fusion hip-hop that takes its listener to a completely different world.

Starting off their venture with Control and following the track with Horns Blow, the band has displayed their imaginative skills and the acute passion to bring out something new and unique for their fans. A true musical genius, the Band of the Hawk has truly made our Friday’s longing and pleasurable.