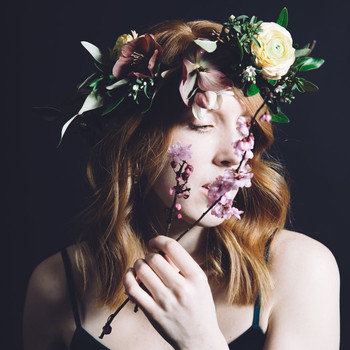 Lindsay Clark’s new full-length Crystalline is a compendium of quiet moments. And “quiet moments,” perhaps, is also the phrase that most accurately exemplifies the album’s milieu – not just for its stillness and subtlety, a singularly rare folk endeavor that employs rhythmic elements, acoustic guitars in open tunings, and soft-but-potent harmonies that rise in and out in delicate crescendos – but for its creative backdrop; Clark wrote it largely in the quiet moments between a number of momentous life changes.

Crystalline sees Clark parsing out her own life, measuring distances between people and places: her musical beginnings growing up in Nevada City, California where she grew up playing classical piano and violin – a hometown upbringing for which her love often shines through; her past romantic entanglements, for which her writing seeks understanding over nostalgia; and her relationship with her family – namely her brother, who has been struggling with mental health crises. “I found myself grappling with distance,” says Clark in regards to the album. “My own distance from myself, geographical distance, and emotional distance in relationships with others, whether that was by choice or by circumstance. Somehow, through that, I found closeness in the songs themselves.”