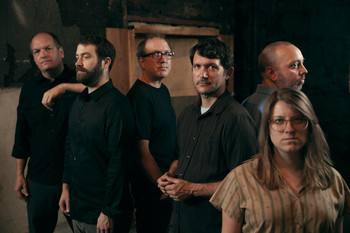 Cursive today shared their new song “It’s Gonna Hurt,” the third and final early single from their forthcoming new album, Vitriola. Of the moody, foreboding track — a heady mix of angular guitars, haunting cello and synths, pulsating bass, and forceful drums — singer/guitarist Tim Kasher says, “This song is about watching those closest to you as they seem to deliberately self-destruct. How we find it hard to forgive them for it, but also how we carry the blame for it”; listen now HERE @skopemag. “It’s Gonna Hurt” follows lead single “Life Savings” (“It’s classic Cursive, with psychic nails of sound and Kasher’s righteously spit anger, enriched by a guitar melody that breaks apart the rage.” – NPR Music) and second single “Under The Rainbow” (“a heavy hitter” – NYLON). Vitriola marks the band’s first new album since 2012, as well as their debut release on their own label, 15 Passenger, and will arrive in stores next Friday, October 5th.

Cursive will head out on tour mid-next month, beginning on October 18th in Kansas City, MO. The first, eastern leg of the tour will wrap up on November 18th in hometown Omaha, NE and the band will then begin their western run on January 19th in Boulder, CO. A current itinerary is below and includes a November 7th show at New York’s Irving Plaza and a January 31st show at Los Angeles’ Regent Theater.