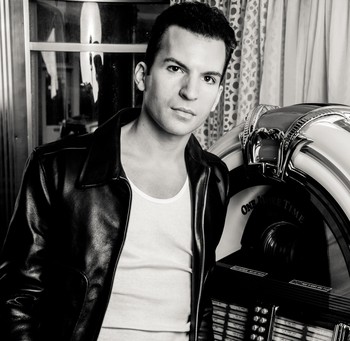 It is a clear message that talented performer Brian Hutson is sending, “I am here to make a mark in the industry in a big way.” He seems to have already done that. As an independent artist with only an EP and a new single out he has managed to capture national attention. He is currently featured on a billboard in the famous Times Square in Manhattan, if that’s not breaking the barrier not sure what is.

Brian was originally classically trained and immersed in piano lessons and choral singing when he first started in music. His middle school choir director was the first one to notice his emerging talent and advised him to search for regional choirs as well as adjudicated solo singing. Brian did just that while he worked towards a BA in Economics which landed him a job on Wall Street. He soon would be discovered by producer Joe Vulpis (who worked with Lady Gaga) in late 2014 at an office holiday party.

With that connection to Joe he would release his first single “Let It Ride” during the summer of 2015. The single would eventually reach #5 on the FMQB Adult Contemporary Top 200. It also managed to hold a Top 10 spot on the AC Top 200 chart for almost three months. It also was well received in Europe.

“It was a powerful moment in my life when I began to work with vocal teacher Don Lawrence, who also works with Lady Gaga. He really pushed the envelope for me, teaching me proper pop vocal technique and instilling in me the confidence to perform in front of large audiences.”

One of Brian’s inspirations is artist Ed Sheeran. After Brian caught one of his shows he admired how he commanded the stage with no fancy techs or elaborate stage show. Though Brian prefers to be more of a showman with his act, he appreciates how Ed’s act represents that ultimately audience connection and engagement is about one’s voice and craft.

Since his debut single he has released an EP “Midnight Sessions” and the new single “Habit”. The EP was released in November 2017 and received much fanfare from such outlets like HuffPost, No Depression and the Journal of Roots Music to name a few. The EP took a different turn than his first single. It was a more Pop infused project with tracks like “One Night Stand” and “Kiss Me Feel It” that gave the audience a taste of what’s to come.

“That EP has many layers and a lot of double-meanings in my lyrics. The title is definitely attributed to working on that project from midnight till 3 am most nights.”

On Labor Day of 2018 he released the long awaited single “Habit” which has begun to create a buzz in the music scene. It has already managed to make it to Billboard radio and debuted in the Billboard Top 200. It is the first single on the anticipated full album under the same name due out in October of 2018. It will be an eleven–track album that will offer a pop– and dance- infused flavor which Brian was striving to achieve. He has managed to do that on this new project.

“I wanted to create a versatile album, filled with songs that people could play at a party, work out to, or listen while sitting back and chilling out.”

Brian is first and foremost a performer and has proved to be a strong one at that. One of his favorite venues to take the stage is at Webster Hall which he last played at in 2016. On the heels of the new album he has begun to tour the East Coast in Philadelphia, New York, DC and New Jersey and a Europe leg is being organized as well. For the new single “Habit” a video was released recently and within a week managed to acquire over 12 thousand organic views. With managers Joe Vulpis (AP Music) and Ms. Essence Moraldo (Triple SSS Entertainment), a release party for the album is also in the works.

Besides all the music work he has put in he has also made some key partnerships and his music has been heard in stores including Macy’s, The Gap, Victoria Secret and many others. Brian is not only passionate about his music but also on national issues like Bullying and Cancer advocacy. He has come very far for someone fairly new to the scene.

“We know people will fall in love with Brian as an artist and as a person. Be prepared to hear more about Brian Hutson in the near future as he rapidly rises to the forefront of the pop music scene,” said co-manager Ms. Essence.