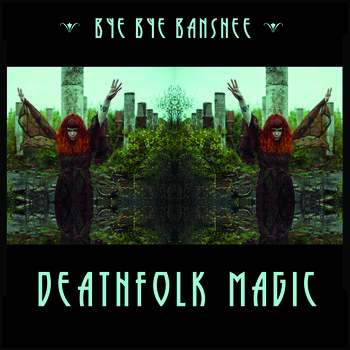 Have you ever stopped to think about your life? Stopping to think means to actually sit down and ponder the entire years, months, and weeks that have entered your circle of hours altogether; and then actually think for that particular moment about what you might have been doing that you already aren’t doing in your life currently. Some would travel if they could while others would find a way to really grasp life from a different angle and conquer the life dreams and goals that might have existed. But something that everyone will actually have to participate in someday is the one thing that many refuse to accept and guess what that is? Death…Death is something that everyone living on earth will have to deal with, accept, and eventually participate in. Why is death the focal point at the moment? It is because of Singer/Songwriter Jezebel Jones and her new album coming soon called, “Deathfolk Magic.”

Jezebel Jones, a native of Minnesota, has placed something out that has its own description, story, case, cause, plot, and narrative in her new album “Deathfolk Magic.” At first listen, Jezebel Jones has a very unique and almost ghostly sound as it speaks in details about the thoughts that many people have in life as it relates to death. In comparing the sound that is heard, Jezebel Jones has a very remarkable vocal tone quality of Stevie Nicks and a true Fleetwood Mac creative touch. Jezebel Jones shows a sign of comfort through the dark but rich sound that she has presented on this new album.

Digging into the album, the first song on the album, ‘If I Die In My Dreams,’ a really scary theme comes through with this adaptation of what could happen in someone’s nightmares. Jezebel Jones has a very folk-based pushing theme that signifies a true moment needed to decipher what a person could be seen in the midst of their sleep. ‘If I Die in My Dreams’ is a pretty tough song as the hidden gem of the song would be the Hammond Organ solo that is ghostly in every possible way. What an interesting way to speak about death while asleep?

The next songs from the album include, ‘Bye Bye Banshee and Psychopomps.’ In digging into the true hidden ability of Jezebel Jones and the group of musicians that created this album, ‘Bye Bye Banshee,’ has a truly contagious blend of sound that truly conquers folk music such as Ben Howard or Bon Ivor, except the vocals, curve definitively into a sound that is painful as the person in the song is preparing to make a transition onto death. Jezebel Jones has made a very, heavy folk sound that stands out as not many artists take chances of making dark music but someway somehow, Jezebel has left a mark that is undeniably easy to listen to. In ‘Psychopomps,’ the third song from the album, Jezebel Jones truly lets out a work of art with the fact that there are old souls drifting along in her life. As clever as the song is, it is almost easy to forget the message that is being spoken as the music behind the lyrics speak a truly painfully dark image. Not many people would want to know or even begin to witness any other types of lifeform, (whether dead or alive), but yet Jezebel Jones doesn’t seem to mind.

In the final song of the album, ‘Skull Rattles,’ is the true winner. The music alone feels like a drifting raft in the South Pacific, yet, as peaceful as the song is, the message is one that truly makes you stop and wonder. Honestly, the topic of death is one that many people clearly leave alone and sadly, people take the mentioning of death to mean negativity, but somehow, Jezebel Jones seems to be living a wholesome life discussing it! The extremely long solo style that is throughout the album is very becoming, even a sense of romantic dreams.

All in all, Jezebel Jones has a very respected and easy sound to like: the topic matter that she sings about is sending shockwaves throughout her listeners and followers. From SXSW to many other portions in the United States, Jezebel Jones is here to say and it is safe to say that if you go and listen to her sing and play live in the United States as she will raise the eyebrows of many and make the rough of our heads reach even higher heights! This album is special, unique, but seriously speaks a real message about a very harsh topic: Death. Do follow Jezebel Jones and check her out live—It will be Worth It!