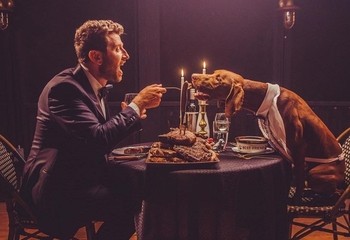 Fans of country superstar Brett Eldredge get a long-awaited glimpse into the head of man’s best friend in his brand new music video for current single “Love Someone.” Directed by Jeff Venable and shot in the Nashville area, the video encapsulates the perfect day as imagined by Eldredge’s beloved dog Edgar – candle-lit steak dinners, motorcycle rides across the city, afternoons at the park and more. Watch what it means to “Love Someone” HERE @skopemag.

Eldredge has been combing the country with festival dates and television appearances all season long. He set a new attendance record at Chicago’s Windy City Smokeout Festival, where he drew a crowd of more than 18,000 fans, friends and family members. Earlier this month he was joined by GRAMMY winner Meghan Trainor for a CMT Crossroads event filmed just outside of Music City. Together they performed hits ranging from her debut single “All About That Bass” to his chart-topper “Drunk On Your Love.” The pair first collaborated in 2016 on a version of “Baby It’s Cold Outside” from Eldredge’s holiday album Glow, a tune that peaked at No. 1 on the Holiday Music and Adult Contemporary charts. In August, he took the outdoor stage at Jimmy Kimmel Live! and also appeared on ABC’s CMA Fest concert special.