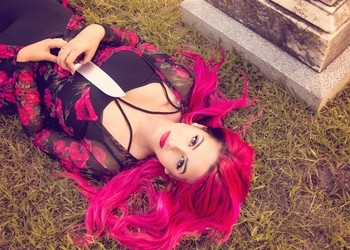 At just 19 years old, alternative dark pop vocalist Jules Walcott is out for vengeance on her second single, “First At The Altar,” out today with a corresponding music video. An alternative and metal vocal veteran, Walcott comes from a history of being a frontwoman. Now placing her primary focus on her solo endeavors, the Long Island native is rapidly evolving into her own artistry, a sleek combination of both her original rock origins and modern dark pop. “First At The Altar” is a glistening example of what Walcott embodies as a solo entity; anger, yet grace, power, and a refreshing amount of rawness for such a young writer. Her debut single “Please Leave A Message,” released earlier this summer, was built upon a viral Instagram video of Walcott singing an Evanescence song earlier this summer. The video was a clear representation of her raw talent, which she carried over into the studio to begin creating a hazy, meticulous, almost sinister production style with engineer/producer Okan Kazdal (NEVRLANDS). Perhaps the most intriguing aspect of Walcott’s rising solo career is that she went against the current, moving from band to solo instead of the opposite way around. “First At The Altar” gives listeners an eerie taste of her upcoming EP, as well as a clear picture of her artistic style. About “First At The Altar,” she states:

“First At The Altar” was lyrically one of the most exciting, yet challenging songs I have ever written. Written in my perspective about the time I was cheated on in a relationship, the writing process of this song was clearly driven on the emotion surrounding this experience. As I started writing the song, my goal was for it to be a diss at the person who cheated on me. As I kept writing, I began to discover that I wasn’t writing a diss track, I was writing about the inner conflict I constantly struggle with, where I let some else’s actions take control of my life.