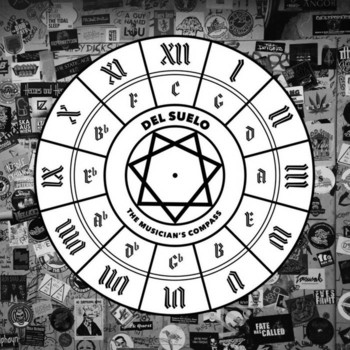 Del Suelo, a pseudonym for Erik Mehlsen, made major waves with his ambitious 2016 release I Am Free, a stunning musical mix imbued with considerable literary flair, but seems poised to reach a higher level of renown with its follow up The Musician’s Compass: A 12 Step Programme. This release is even more ambitious without ever lapsing into self-indulgence and the twelve songs included with this conceptual minded effort attempts to lay out a narrative of 24 hours in the lives of a touring band. It’s a simple enough concept, but Mehlsen explores his subject matter in an idiosyncratic way while mixing humor and pathos together with impressive results. The Canadian based performer is a popular live act in the Great North, but his signature blend of musical smarts and artistic ambition has the potential to please much larger audiences if given the proper exposure. The Musician’s Compass: A 12 Step Programme deserves the highest profile it can achieve.

We’re ushered into collection with the sound of a cheering crowd and the music for the first track “Second Encore” begins soon after. The musical arrangement for the opener immediately captures your attention, especially the harmonica weaving along with the other instruments, and the slightly loping groove brings you into Del Suelo’s world without any chest beating histrionics. The alternative rock vibe with a decidedly literary bent continues with the second song and album single “Pack Rats”. The song’s accompanying music video underlines the subtle humor of the song, but discerning listeners will hear plenty of that quality in the song alone. The rhythm section lays down another impressive groove while slightly distorted guitar unreels funky fills over the top. The song’s instrumental break allows the guitar a chance to shine without ever coming off overwrought and trades some tasty volleys with some rollicking piano lines.

Much of the same quasi-funk posturing continues with the song “A Lust Supreme” and the added presence of keyboards adds further flair to the performance. Mehlsen’s song titles on this release are often nods to well known albums or band names and this song is no exception as the title is an obvious echo of John Coltrane’s A Love Supreme. There’s a handful of atmospheric twists built into this track and post-production effects accentuate some of those moments, but there’s much more of a focus on melody here than we’ve heard from this album so far. “A Panic! At the Disco/The Fulsome Prison Blues” continues the same aforementioned tendency of name checking older or existing acts and songs and it’s the second longest track on the release. The inventive and extended introduction eventually segues into an alternative rock workout with an assortment of tricky time signatures.

There some accompanying sound effects at the beginning of “Caress of Steel Wheels” and Del Suelo’s predilection for funky textures gets another full airing with some potent entertaining hip hop touches upending your expectations. The mix of straight forward vocals and musicality with the aforementioned rap influence makes for one of the album’s most compelling numbers. Mehlsen’s writing peppers the song with some swaths of brass as well. The album’s penultimate tune and longest composition, “Darn that Dream/Stairway to Eleven” has a languid pace few of the earlier songs and the arty, challenging first half with its melancholic vocal transitions into an often spartan second half with post-production effects making an impact once again and Mehlsen’s vocal rating among the best on The Musician’s Compass: A 12 Step Programme. This is an intensely theatrical and musically rewarding experience and the novel of the same title joined with the album’s release makes it one of the more unique offerings in recent memory.