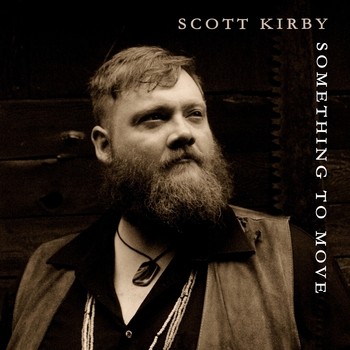 Have you ever been to Wisconsin? Known for many great features including the cheese capital of the world of the beloved Green Bay Packers, there is so much wonderful magic happening in this part of the United States of America. More importantly, there is something that is brewing, not of yeast or fermented grapes, but of a music machine waiting to explode over into uncharted territories. Do you know what that something is or rather, whom that someone is? It is none other than Guitarist, Singer, and Songwriter Scott Kirby and he has something special waiting for us all in his latest single, ‘Something to Move.’

One would think that it was Scott Kirby’s first pass at placing his soul into music for all to hear, but surprisingly, this cowboy has seen many rodeos as he already has Nine Albums to date!? With so much passion, a busy schedule, his songwriting captivates the new listener and I’m here for it! At first listen, a striking guitar hammers through and amazingly, his style is very much unique but has a distinct character, with its blazing six strings bringing him around to home-plate! Very patiently awaiting the first verse, his vocals don’t disappoint as somewhere down the road, his love of vintage songs, vintage gear, and vintage production also shine brightly!

Scott sounds remarkable but puts you in the mind of a modern Chris Stapleton, Our Beloved Prince Rogers Nelson, and the mixture of acoustic guitar, modern pop percussion, and over the top production which probably has a lot to do with his recent working with Grammy Award Producer Jeff Bova, whose list of credits alone top anyone’s list of favorites! ‘Something to Move’ is just that special song that might be tucked away ready to be sent to someone having that horrible day that instantly creates a “pick me up” smile.

Digging further into the song, ‘Something to Move’ really IS just that: Something TO MOVE! Scott has crafted Blues, Rock, Soul, and Alternative patience into a stew and placed some hearty meat and potatoes together that will feed anyone that’s hungry! All around, to say amazing doesn’t cut the amount of talent and sound brewing in those fingers! And even more special is the fact that it is a song that is organic, earth-based, and has pure grit from long hours in the studio at night! ‘She wants Something to Move…She wants Something to Move…She wants Something to Move!’ Direct movements and lyrics straight from this instant ladies night out hit song, and they really work! I hope whomever he is writing about is LISTENING as he is definitely speaking! And if the lyrics aren’t heard loud enough, try digging into the solo guitar that screams Gibson Les Paul around 1:45! All around, this song will cause a listen or two!

Whether impressively holding a tight touring schedule or just staying true to the world of musicianship, there is a lot of action going on in the world of Scott Kirby and his train left the station years ago! If you are not following this monster sound, something is either not connected in your speakers, or you just haven’t been enlightened just yet, BUT, Scott Kirby is a uniquely made soul that screams creativity as a middle name! Whether in Wisconsin or all over the United States of America, somewhere along the way, it would be an adventurous and heroic moment in your life to catch him live somewhere as you won’t be disappointed! Anyone that can serve a mean plate of blues, a serving of rock and a dessert filled with the soul has my musical stomach captured at heart! I highly recommend ‘Something to Move’ TO YOU!