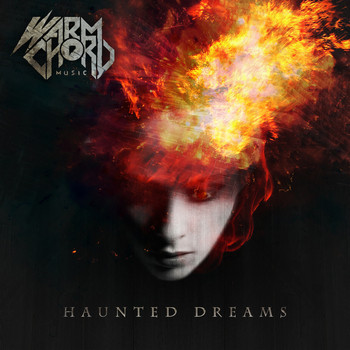 Jay Croft’s journey through the professional music world began in the 1990’s when he helped co-found Detroit’s indie power pop outfit Bedford Drive and played drums for them from 1998 through 2004 when he opted to leave the band and focus on other pursuits. He learned guitar during that tenure with an eye towards increasing his songwriting contributions and the first indication, outside of Bedford Drive, of this paying off for him arrived with his first solo album, 2000’s DIY effort Adventures in Lo-Fi. Croft continued following his wayward muse over the next few years, forming another briefly lived outfit, the two-guitar driven Keep Manhattan, and logging significant time playing drums with the classic rock cover band The DR5. He founded his current project, Warm Chord Music, in 2013 and scored with an action-packed initial release “Indecisive”. The latest single from Warm Chord Music, “Haunted Dreams”, shows Croft continuing to develop and refine Warm Chord Music’s punchy hard rock sound and should expand his profile both locally and on a national level.

If nothing else set this apart from your standard hard rock fare, Croft’s willingness for highlighting dueling female and male lead vocals in this context marks it as far from standard. Nicole and Aiden exhibit enough differences in their respective approaches to give “Haunted Dreams” an idiosyncratic flavor, but the similarities between their takes on the lyric and singing with the band rather than against it preserves the unity necessary for this song to hit a new, higher level than any of the project’s three preceding singles. The two singers are session vocalists, but you’d never know it. Instead, they attack the song’s lyrical content like they’ve been involved with every step of its creation and are fully invested in both the arrangement and song’s message.

The brisk pace Croft sets out for “Haunted Dreams” gives it a rambunctious energy level, but there’s never any sense the song is about to careen off course. Instead, Croft shows great taste and restraint in a genre usually not associated with such descriptions and the streamlined tone of the single reflects his utter lack of self indulgence. Warm Chord Music may be Jay Croft’s creative baby, but it’s a testament to his talents that “Haunted Dreams” doesn’t sound like a glorified solo vehicle but, instead, a full fledged band effort that lingers with you long after the final note fades. It’s convincing hard rock without any of the clichés too often weighing down such efforts.