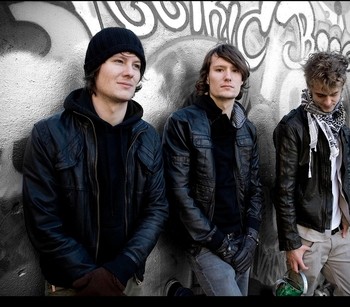 After experimenting heavily with classical influences in their last two albums, Vinyl Floor is getting back to their roots in their brand new album Apogee, which sees the band stripping away all of the frills and focusing on the core sonic intensity that inspired them in the beginning. I’m a big believer that even when a solo artist or a band departs from the style of play that they employed at the start of their careers that the essence of that sound never really goes away, and Vinyl Floor do a good job of revisiting their point of origin without overindulging or recycling old formulas. I expected to like what I heard in Apogee, but frankly I was blown away by the ways this band has grown in just the last four years.

Apogee isn’t a concept piece, but it nevertheless has a very progressive flow to it. Even in this bare bones setting, one track has a sly way of hinting at what we can expect in its successor, and while none of the songs channel the exact same energy, there’s a sinister sense of mischief that gleefully pushed the listener from one mammoth riff to the next. I’ve always had a disdain for prog rock, mostly because of the pomp and bravado that usually saturates its song structures, but when Vinyl Floor uses this DIY approach to making somewhat artier compositions I really don’t have much – if anything – to complain about.

There’s a suffocating, almost insular feel to the production value of Apogee that Vinyl Floor claims was completely intentional, and I must say that it definitely adds a raw texture to the songs that is more akin to basement tapes and demos than it is to a more polished studio recording. But rather than coming off as unrefined or amateurish, Vinyl Floor sounds more real and tangibly relatable than they ever have before. I’ve found that in almost every subgenre of pop music, when a band walks away from the glitz and gloss of overproduction and tech-savvy engineering in favor of using a more grassroots approach, the finished product plays out a lot smoother than the choppy, robotically engineered material ever does.

Apogee is an excellent comeback for Vinyl Floor, who some critics unfairly dismissed in their last effort as being too experimental for primetime and out of touch with what their core audience wanted to hear. The band didn’t stop following the beat of their own drum to appease critics with this album, but they certainly have absorbed all of the stylistic changes necessary to bring their sound into the forthcoming decade in popular music. I’m confident that these guys are going to be around for a long time to come, and if they keep producing music as passionately constructed as what they have in Apogee, they’re almost certain to become legends of their own generation in due time. If anyone needs evidence of their validity in indie music and beyond, I’d recommend giving this album a spin at the soonest possible occasion.