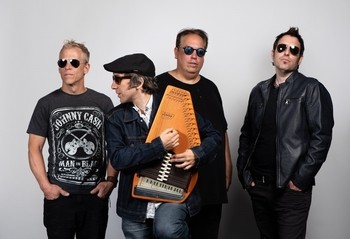 ‘Half the Battle’ is the latest video from an upcoming full length album titled Phantasmagoria.. The video for ‘Half the Battle’ is described by Azwel frontman Jason Perillo as “A tune written on piano, with a nice sort of honky tonk sound. It’s about someone being chased around town by a gang of criminals who don’t realize that they got the wrong guy. But it’s not necessarily about criminals. Everything I write is kind of a metaphor. Features a nice horn solo melody and the video is based on a 1920’s silent film.

Azwel is a project that involves songwriter Jason Perrillo and his live band. For the past 15 years, Jason has gained online success recording and producing independently released albums in his New York studio. He describes the music as melodic, eclectic catchy pop/rock with songs that are influenced by various styles of music. The sound is often compared to britpop/rock artists. Within the last few years a live band was formed consisting of Joe Lorge (guitar/backing vocals) Gregg Steele (bass/backing vocals), Johnny Zaletel (drums/percussion), and Randy Bennis(Keyboards.)