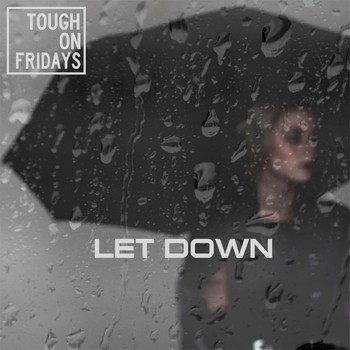 Have you been to Texas? Known as the ‘Lone Star State,” Texas has so much to offer. First of all, it is one of the largest states in the USA. Second, iconic cities are all spread around between Austin, San Antonio, Houston, Dallas, but there is a little place on the map that has something so special and unique that can’t compare to the state size! And no matter what might be the perception, barbecue is NOT the only thing that the great state of Texas is known for! From all of the magical great things like having 12 major professional sports teams for men and women, there is something magical going on in Texas and it starts with the new music coming from the female power duo, Tough on Fridays and their new release, ‘Let Down.’

Tough On Fridays, consisting of Bassist, Guitarist, and Vocalist Katie and Guitarist and Vocalist Caleigh. Hailing from Georgetown, Texas, the two girls have a lifelong bond that has blossomed into a completely working music relationship THAT ACTUALLY WORKS. And they aren’t shy about the new music that has been dropped off on a warm platter either! ‘Let Down’ is the powerful, rocking guitar anthem that screams to that partner that did the other wrong, “Hey, check me out now! I’ve made it!” This is the entire message that truly pays an even greater message in today’s world as everyone has had that foolish partner that bailed out way too quickly!

At first listen, Tough On Fridays have a classic 1980s, Debbie Harry of the band, Blondie theme going. The band sounds very much like a very high energy, fun-based band with a deeper message. I suspect somewhere deep down within that a touch of classy feminism is laying around. There is a very deep message in the song as many times when people make a decision to break up, someone is left having a lot more feelings for the other person. Unfortunately, there will always be breakups, but ‘Let Down’ seems to be the greatest response to any such letdown! The most impressive quality of the song ‘Let Down’ would be the fact that award-winning producer, Tre Nagella, has molded this song into his baby. Already a Grammy award-winning producer, the band showcases the production and mixing qualities that only he possesses on this gem and honestly, it causes the average breakup memory to quickly dismantle into happy thoughts! The song also has a very L.A. Rock scene sound —That of the 1980s when girl rock bands were first infiltrating the United States music markets. The song is well written but more importantly, the vivid imagination involved in the direction of the song comes out in the final gift that is given on that platter: A true thank you and goodbye to the ex!

Tough On Fridays are truly something unique as the sound is very different from the moment that it is played! Standing firm at 2 minutes and 48 seconds, they pack a heavy message in such a SHORT amount of time thus taking it back to the days of shorter records like that of the past. This song is for sure going to be a breaking moment in the career of Katie and Caleigh as ‘Let Down’ is going to everything but That! I highly recommend this song and hope that you catch these girls in action soon!