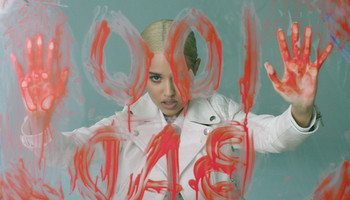 “100 Bad,” the lead single from Genesis’ highly anticipated debut album releasing this year, is receiving early critical praise with Highsnobiety and Nylon dubbing the song an “anthem.” The Charlie Heat produced track is the first song the pair made together. Genesis explains, “’100 Bad’ is the track on the album that still sounds familiar. I had the idea for the hook, then Charlie gave it wings. It’s sort of an ode to the beginning of my album process. There are six Charlie Heat tracks on the project. This one was the beginning.”

Speaking on her inspiration behind the video Genesis says, “The ‘100 Bad’ music video turned out brighter than I expected. For the chorus it was either puppies or girls, the tampon scene is sort of my DIY take on Kelis laying in candy – the cash scene is a direct reference to Tracey Emin’s “I Want It All.” The outro is a champagne ejaculation and it’s supposed to make you uncomfortable – it’s a commentary on the male gaze.”

Of half-Swedish, half-Tamil descent, Genesis was born and raised in Vancouver, Canada. Her debut mixtape garnered praise from Vogue, The FADER, Dazed, Elle, W, PAPER and many more, and she recently returned from a string of North American dates with Dua Lipa. In demand in the fashion world, Genesis recently appeared on the cover of Clash and has performed for Marc Jacobs, Miu Miu and more