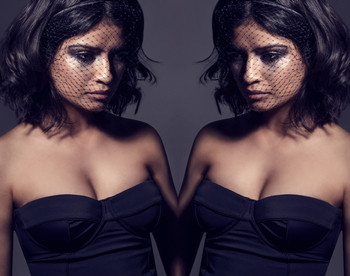 Ishani’s ‘Dark Angel’ may be her best song yet, but the difficulty with such an assertion is that it belies the pains involved in creating it. ‘Dark Angel’ is certainly the most difficult to write of all her songs so far. “I have lost close friends to suicide,” she says of the song’s subject, “and recent events have forced me to revisit this song, – we are living through a time of increased awareness of mental health, but we still see so many people ending their lives.” Despite the abject darkness of the theme, and despite provocative lyrics that leave little to the imagination, (“stay with me here until we are dead” she urges those grappling with suicidal thoughts), there is a sense that Ishani has made leaps with co-producer Zaflon towards emerging with a distinct sound. There is enough in the melodies and the beautiful harmonies to suggest a child of the No Doubt/’Bring Me To Life’ school of goth-kid pop hooks, but more than that, there is the suggestion of an artist whose sound may evoke certain styles, but whose delivery is in a class of her own. Ishani has the vocal confidence of musicians decades her senior, and in her pained and hair-raising performance of ‘Dark Angel’ you can already see her beguiling star power.

“This song was pure therapy. It has helped me cope with the death of two of my friends, both of which turned my whole world upside down. I hope this song can help others. So many people are affected by suicide, whether it is the death of someone close to us or an idol.”