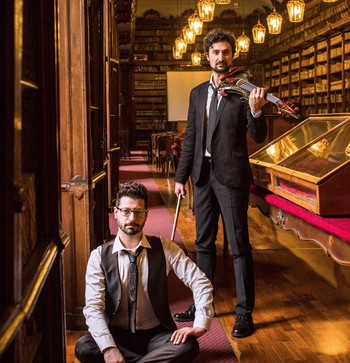 Paolo Fosso, keyboardist and mastermind of the compelling duo Armonite, along with violinist Jacopo Bibi on violin, have recently released their new album And The Stars Above to critical acclaim worldwide. Although most of their songs have little or no vocals, their messages or themes engulfed in the songs manage to present themselves and evoke passion, excitement and vibrancy in a strange addictive way.

I spoke with keyboardist and composer, Paolo Fosso, who is based in Milan, Italy. He was not only brilliant, but passionate about his artistry, and proud of his new release…..

What makes your music so powerful!?

Paolo Fosso We take a few snippets from the world and try to stuff them all in a box. But when the box is full and you keep on pushing more stuff, then the box blows up. And that’s our way to be powerful, I guess. [laughs]

What influences your music the most?

Paolo Fosso Movies, technology, videogames, books, philosophy, travels. This is the most of me. When you read a book or watch a movie, imagination is stimulated and new ideas come to mind in a sort of domino effect. I’m a great lover of movies and TV series. Thinking of music like a sort of movie sequence helps me a lot when it comes to composition.

Tell me about your new release about to be unleashed to the world.

Paolo Fosso As with the previous album, And the Stars Above is an instrumental mix of electric violin, keyboards, bass, and drums. It’s a journey through 12 tracks, starting with “The March of the Stars” inspired by Dante’s Paradise and ending with “Ghosts”. The album also features two bonus tracks – a polyrhythmic piece for piano solo, “The Fire Dancer”, and the String Quartet “A Playful Day”. Throughout the album, lingers a ghostly female voice, appearing and disappearing here and there before fully emerging in our first song with lyrics, “Clouds Collide”. I’m confident this is going to be a great release, with a rather peculiar view.

What makes this new album different than the other music you’ve released?

Paolo Fosso The sound is more oriented to soundtrack music with textures that feel very immediate. “The Sun is New Each Day” had a heavy compact sound… And the Stars Above is groovy, with different vibes across a bunch of genres. There’s something indie in this new sound that we’ve never explored before.

Does the political climate of the world influence your compositions?

Paolo Fosso Indirectly, because we draw our inspiration from the world around us. Politics decides where our society is heading, political leaders know they can change the world for better or for worse. They should always remember every person has a soul, and no one deserve to be trampled on their rights.

What would you say to promote your music and evoke the fans to buy your newest release?

Paolo Fosso Instrumental rock for electric violin, keyboards, bass, and drums. No vocals, no guitars. Plus electronics, classical, and world music, topping of progressive metal and a pinch of pop culture. Isn’t that curious enough? [laughs]

“And the Stars Above” is a journey through 12 tracks, starting with “The March of the Stars” inspired by Dante’s Paradise and ending with “Ghosts”. The album also features two bonus tracks: a piece for piano solo, “The Fire Dancer”, and the String Quartet “A Playful Day”.

Paolo Fossi We’re going to tour with our show in September, playing originals from our albums and soundtrack covers in violin rock from the most popular movies and video games: Game of Thrones, Harry Potter, Pirates of the Caribbean, Skyrim, Metal Gear Solid, Halo, Final Fantasy, and many others!

What is your favorite thing about playing live?

Paolo Fossi Create a connection with your audience, vehicle yourself, talk about your feelings and your ideas behind music, and share it with your public. This is the most important thing for any artist.