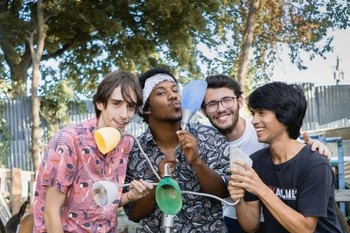 Well we made it to Wednesday, halfway to #tgif. While we wait for that we figured we could get to know the guys in Indoor Creature. Indoor Creature is a band from Austin, TX composed of Caleb Fleischer, Travis Kitchen, Marcus Bell and Terrence Kiser. Caleb and Travis met at while working at a Japanese restaurant and quickly discovered musical chemistry. The project initially served as a vessel for exploring the imaginations of the duo, and a means to make well produced, original music in a bedroom. It has since evolved to include Terrence Kiser on Guitar and Marcus Bell on bass. The band now focuses on both recording and live performances. With influences from many eras and genres, Indoor Creature likes to think they could fit into any era of music, past, present or future. What are we waiting for, lets jump right in!

CF: Our next album! We’ve released a single called “Ode to Boone” that will hopefully make our next album, the next single we put out will definitely be on it. That album is going to be a huge growth for us production wise. We’ve been experimenting with a variety of sonic palates, and a few of those experiments started working. We’re really starting to feel the momentum that carries you to an albums finish.

TK: Other local Austin acts who are really starting to do awesome and bigger things like Summer Salt. They have such a simple sound and have just signed to Epitaph records, so it gives me hope that you can start something from around Austin and make it work for you from there. A lot of people tell you that you have to get out to New York City or LA just to have a chance at doing something with music, which just isn’t true and can be a limiting mindset. It’s more than just success, though.

CF: The local scene is Austin is really inspiring. You meet so many people really dedicated to their craft. As for national acts, Dirty projectors are a big inspiration for me. Dave Longstreth has repeatedly reinvented their sound, while maintaining a detectable consistency. I really appreciate that creative drive.

TK: Outside of music I have a ton of fun messing around with photo and video editing. Social media platforms give everyone a chance to feel like an artist, and that’s how I like to use my accounts online. It can be fun to think about what you can inject into another person’s day because everyone is just checking Instagram all the time, whether that be something to challenge them intellectually, laugh, or just a pleasant color. I made movies when I was a kid so I still deeply enjoy putting videos together as it can be a very introspective and nostalgic experience.

CF: If I’m not playing music I’m probably reading. I’m an avid reader, mostly fiction but I rotate some non fiction in to improve my understanding on new subjects. I also really enjoy ecology. I love to learn about the different species of plants and animals that are around me, how they interact with each other and how the environment shapes their adaptations and interactions. If I’m not doing either of those, I’m probably practicing Spanish.

TK: Usually the artistic impulse strikes pretty often, but it doesn’t always feel most natural to go to music first. All of the best music sessions are the ones that are started on a whim, and produce lots of wild creativity. But music isn’t always like that, mixing all of the backlogged projects you’ve started in that manic state can sometimes be hard work and when you’re creative you just want to get it all out there now!

CF: Pretty much when I get off work. I have so many ideas, and I know that not all of them are good, but I won’t figure out which ones are good until I try to produce a demo. Travel is also a huge inspiration to me. When a moment strikes me, I try to tune into my mind and find a melody or a rhythm.

@skopemag: What is it about music that you knew this was more important than all other artistic endeavours?

CF: I’ve tried my hand at so many creative outlets. Music was always the one I came back to. It fits my lifestyle the most. I can create fully realized tracks without having to ask a dozen people for favors. I can work on it anywhere. My phone is full of voice memos. I used to dream of being a comedian but the comedy world doesn’t line up with my way of living. Music provides access to many forms of creative expression. Lyrics allow me to craft meaningful prose, music videos allows the filmmaker inside of me to express himself and sometimes the comedian will show up then. When you play live, you have a chance to connect with people through performance. Music is a mysterious and powerful force that is innate in all humans. It’s an honor to continue a craft that has been a part of humanity since the dawn of society.