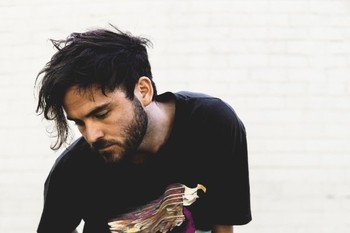 When listeners were first introduced to the stylings of Sydney producer and musician Oh My My earlier this year, they got a hit of dark and sultry electronica with ‘Animal House’; now, we see him go one step further, switching lanes for a brighter, more earnest soundscape with new single ‘WOE, MY HEART’.

Employing delicately placed piano in amongst thudding beats elevates the song to being more than just a crystal cut banger, Oh My My delves deeper in pulling on the heartstrings as it explores themes of loneliness and heartache. Though vocal echoes and ambience adds space, the pace of the percussion anchors ‘Woe, My Heart’ and as the song enters its final minute, a sense of anxiety builds.

As Oh My My (Sam Thomlinson) explains, the idea is to represent being caught up in one’s own feelings. “‘Woe, My Heart’ was written for a good friend who was going through a pretty tough off and on relationship/break up. It’s mostly about heartbreak, but also how someone can knowingly continue to hurt someone they claim to care about, just to appease their own loneliness. Musically this song is all about the piano and vocal. I tried not to sully those parts with too much embellishment. There are moments where I’m really trying to show the heartbreak in the lyrics with disjointed chord changes; other times I’ve tried to use ambient whispering and talking to reflect the feeling of being locked in your own thoughts.”