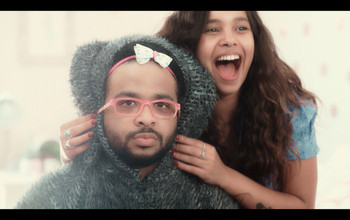 Still buzzing from the release of their last two singles “Be More Mad” and “Shadow,” dynamic R&B duo, Cool Company, is back with the official music video for latest track, “Summer Sickness.” It is the latest buzz single from the duo’s upcoming EP.

Okay Player premiered the track and raved, “Through a delicious blend of mellow and funkified grooves, Cool Company passionately capture a feeling that anyone can relate to. With a range of influences that defy conventionality — ‘Summer Sickness’ jumps off the hype train for the band’s next release, The Dose Pt. 1 EP, which is slated for release in 2018, with Pt. 2 arriving in 2019.”

The accompanying video stars rising actress Alisha Boe, who is best known for playing Jessica Davis in the Netflix series, 13 Reasons Why.

“The creation of the video happened quite seamlessly,” shares director, Jean-Louis Droulers. “I wanted to build a portrait of ‘the player’, whose careless abandon and selfish attitude leaves a trail of broken hearts that ultimately catches up to him. The dog motif and LA backdrop were the perfect elements to add in to ensure that the video maintained the chillest of vibes to support the song, while still telling a compelling story about the constant search for freedom and the consequences that it presents when it’s at the expense of other people.”