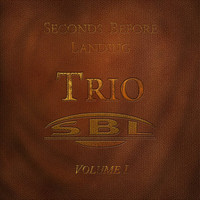 “Maybe I’m Weirdo” kicks off Trio Volume 1 with a distinctive flair you won’t hear from many bands, iconic or otherwise. There’s likewise a plethora of unexpected touches in the composition – multiple guitar textures, piano, and backing vocals support the song and John Crispino’s lead vocal. His dramatic reading of the song’s lyric does an exceptional job of capturing the off-kilter quality of the song’s “narrator” without ever sounding overwrought. The humor of this song isn’t something we’d typically expect from a band so strongly associated with the progressive rock genre, but it’s illustrative of the unique artistic sensibility driving this band and how they stand apart from typical fare in this vein while still invoking classic prog elements without coming off hamfisted.

Steve Schuffert’s lead guitar playing on the second song “1-9-2” puts an emphatic exclamation point on this performance lacking in the first and concluding song on this release and brings straighter rock edge to the EP those aforementioned other songs lack as well. Crispino’s singing, likewise, has a much different slant on this tune than we heard on “Maybe I’m Weirdo” and it’s, perhaps, an underrated part of the band’s presentation that Crispino’s vocals are full of such diverse dramatic value without ever being traditionally pleasing. The lyric isn’t as specific as we heard with the first song, in reference to details, but it’s still quite evocative and makes for an excellent addition to the release.

The finale for Seconds Before Landing’s Trio Volume 1, “You Won’t Deny Me”, is a showcase moment in many ways. Crispino’s vocals really take off with this tune in a way we haven’t previously heard and there’s even some use of sound clips worked into the track that further illuminates the song’s lyrics. This song explores the mindset of a school shooter, the indignation, the rage, and captures that dark frame of mind without ever pushing too hard on listeners. Much like the opening numbers, there’s a wealth of guitar work in this song but, as always, it’s not a featured element of the song and instead has a much more compositional mode throughout the entirety of the song. It’s the EP’s shortest tune, surprisingly, but it has the strongest cinematic thrust of any other song on this release.

Seconds Before Landing’s Trio Volume 1 is the band’s first EP effort, but there’s not a single sign of the band scaling down their ambitions. Instead, it expands on the songwriting range that’s grown with each new release and this EP is, arguably, the peak offering yet from this Pittsburgh based outfit. The first volume indicates there’s more to come in this vein and we can safely assume it will match or, even more likely, surpass the fine quality we hear on this release. John Crispino’s creativity is a leading light in the indie progressive rock scene, but that label seems confining – let’s say, instead, that this is simply a fine music band and Crispino’s songwriting talents extend far beyond mere labels.