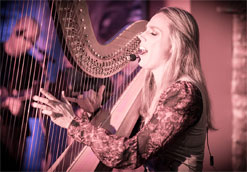 The pivotal moment of Kristy Chmura’s new clip for “Abandoned House” comes right at the three-minute mark. The acclaimed New Jersey singer-songwriter has spent most of the clip in a room haunted by memories: she paces the wooden floorboards, leafs through a box of letters under the bed, and sits wistfully at an old table decorated with small bouquets of flowers. All the while, there’s an apparition of sorts with her – a white sheet is draped over a human-sized object. Shot at an angle by the video director Rob Fitzgerald (also the man behind the camera for Chmura’s “Nothing’s Right” clip), it looks very much like a ghost. As the music swells and the song intensifies, Chmura walks over to the object. Dramatically, she pulls the sheet away, revealing her harp.

That harp has been at the center of Chmura’s project since its inception. It’s been a mark of distinction and an enormous part of her identity as an artist. It’s one she takes very seriously: not only is she a dedicated student of folk and classical harp techniques, she’s a teacher, too, and a founder and director of New Jersey’s Summer Harp Camp. Stained… Glass Heart, her latest album, demonstrates her formidable musical intelligence, and foregrounds the flexibility of her instrument. She’s rootsy and soulful on “Deep Waters”, broadly romantic on “Nothing’s Right”, direct and probing on the politicized “Wake Up”. With “Abandoned House”, recorded at her studio Lucky Penny Studios, she’s given us a powerful ballad of desolation and rebirth. The press has taken notice: Chmura’s new set has been reviewed enthusiastically by critics at The Aquarian, Exposed Vocals, and Huffington Post, all of whom have admired her artistic courage and compositional skill.

Chmura is a commanding presence at the harp, too. Seated at her instrument, she cuts an impressive figure, and she plays with absolute authority. In the clip for “Abandoned House”, it’s not merely a refuge for her in a moment of vulnerability, it’s also a pure expression of her will. Fitzgerald’s camera swirls around her as she plucks the strings, yet as dizzy as the video gets, she never loses her command or her grace. Chmura and Fitzgerald make the most of their set, too. They shot this in a friend’s beautiful Victorian home in Bloomfield New Jersey. The entire house had been lovingly rehabbed over the years, except for the attic space – which had the perfect vibe for the video. Every piece of antique furniture, clouded window, and strip of creased wallpaper whispers of things lost – and things yet to gain.