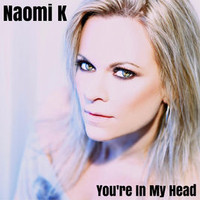 On her single “You’re in My Head,” Naomi K sings, “To you I say don’t stop belivin’,” which suggests that – in addition to Fleetwood Mac, Sheryl Crow and other influences she’s admitted to – this female singer/songwriter has also listened to her share of Journey.

The song is a midtempo rocker describing a romantic partner that – although not around physically – remains implanted in her head. She won’t stop believing in the ultimate hope of partnering because she also sings, “You’re out there waiting for me.” So much of our romantic lives are lived-out inside our heads. Sometimes, the more we think about our relationships the better (or worse) they become. This is because we tend to overanalyze our relationships. Heck, we sometimes overanalyze almost everything.

The song’s groove is build upon a fluid bass line and a swirling guitar part. It’s minorly psychedelic. Had the guitar part been more upfront in the mix, it could have easily been a psychedelic rocker. The song also includes a sweet, melodic guitar solo. The tempo gives it a dreamy, meditative feel, as though the listener is invited into Naomi K’s head to explore what’s going on there.

Naomi K is based in Los Angeles, but is a transplanted Australian, and this single is from her forthcoming full-length album. She’s already won awards for her songwriting, taking home Akademia Music Awards for her singles, “Only Wanna Be with You” and “Take Me Home.” Furthermore, she was awarded Best Pop Album for her 2015 release, It Is Written, also at the Akedemia Music Awards.

The song’s video vacillates between Naomi K either singing before an audience or waiting and wondering at home, and the man in her head at a bar drinking wine. These visuals suggest she’s in his head, just as much as he is in hers.

There is a genre called dream-pop, but it might be accurate to term this Naomi K song style as pop-dream. It’s more standard pop, than alternative dreamy music. Nevertheless, it’s dreamy enough to go beyond mere simplistic pop. It’s the perfect song to listen to when you’re in a state of relationship limbo. In its subtle way, it’s also optimistic. This lover may be out of sight, but never completely out of mind.