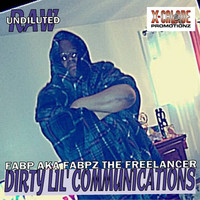 Reviewing Fabp aka Fabz the Freelancer’s Dirty Little Communications, is a challenge. This is because positive criticism doesn’t come easy.

This artist is a rapper with a Jamaican patois in his voice. And normally, rappers don’t really need to concern themselves with singing on key, musically speaking. However, Fabp sort of sings and raps at the same time, and when he’s more singer-ly, he’s consistently flat. It’s excusable, sometimes, when a singer is flat now and again. We’re all human. However, Fabp is flat throughout, which makes it extremely difficult to enjoy his music.

If Fabp wants to find a wider audience, he’s going to need to get some singing help. Either that, or he needs to surround himself with colleagues that are honest with him. If Fabp’s issues were only key-related, it wouldn’t be so difficult to warm up to his songs – especially if his lyrics were good. If he had something to say, but didn’t have a naturally good singing voice, his message would have superseded the sound. After all, Bob Dylan, Lou Reed and Neil Young were – or still are – able to get past vocal limitations. Sadly, Fabp doesn’t have much new tell us. His raps don’t sound particularly meaningful throughout. “Greatest Artists,” for instance, is a song about his career up to this date. Quite frankly, he hasn’t had the kind of success warranting such brags.

Another one, “Money Gees,” reprises familiar rap lyrics about the importance of money. These lyrics shed no new light on the subject, though. There’s nothing wrong with covering familiar territory. After all, there are new love songs written every minute, of every day. What’s important is originality, and Fabp doesn’t tell us anything we haven’t heard before.

When it’s painful to listen to an album, as it is with Dirty Lil’ Communications, it hurts almost as much to write uncomplimentary words. Music is a beautiful thing, and the making of it should always be encouraged. When an artist doesn’t have much to say, and limited skills to say it with, it is no longer a beautiful thing.

Therefore, approach Fabp aka Fabz the Freelancer with caution. Artists like Kendrick Lamar have set the hip-hop standard high. With a musicality that also incorporates jazz musicians, Lamar – in particular – has earned respect from sources well outside rap’s inner circle. If Fabp aka Fabz the Freelancer wants to attain the sort of success he clearly longs for, he’s going to need to do some serious self-examination. He should also get the opinions of musicians he respects and be prepared to take constructive criticism.

At the end of the day, it takes more than a desire for success to make it in this dog-eat-dog music world. One needs to take a good, hard look at the competition and see how well one measures up. And if one doesn’t quite measure up to the competition, serious changes are necessary. Let’s hope Fabp aka Fabz the Freelancer does the groundwork to improve his art – soon.