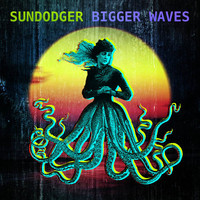 Earnestness is defined as seriousness in intention, purpose or effort, and such depth and sincerity of feeling comes through loud and clear throughout Sundodger’s full-length album, Bigger Waves.

The band is from Seattle and is led by Dan Engel. Although Seattle gained a reputation for being the grunge music capital many years ago, you won’t likely hear many elements from that error coursing through these twelve rock tracks. Nevertheless, Engel’s vocals on “Epitaph” take on an especially Dave Grohl-like growl during the tune’s chorus. When the song gets to its dual-guitar guitar solo, though, we immediately know we’re not in Foo Fighter country any more.

Engel expresses a gentler side with “Grace.” It’s one of those songs that references its title lyrically (“Grace”), without actually using that title word in its lyric. The guitar part is slightly jangly and reminds one of the kind of music R.E.M. created during its commercial heyday.

Sundodger closes the album with “Echoes,” which expresses loneliness. “There’s a wall of TVs/I see what I please,” begins one of the song’s verses. It’s, sadly, a song about having everything and nothing. He has TVs with which to watch anything he likes. He has a pot on the stove, but there’s nobody else to feed. Much like Bruise Springsteen’s “57 Channels and Nothing On,” this song speaks to America’s embarrassment of riches. We have nearly everything we could ever want, materially, yet we’re still feeling lonely and bored. How can this happen? Well, it starts with depending upon material things that only flesh and blood can provide. It also recalls the Replacements’ “Answering Machine,” when Paul Westerberg cries, “How do you say goodnight to an answering machine?” Technology, once again, lets us down.

Another instance where Sundodger’s sound differs distinctly from atypical Seattle sounds is on album opener “Too Much Too Soon,” where the song goes into a moody, Pink Floyd-like bridge section. The guitars take on a David Gilmour vibe, which nicely brings that iconic progressive act to mind.

The album’s title appears in a track called “Banner Days.” It’s another sort of downer song. The chorus is sung with a palpable sense of resignation. “Banner days passed us by/Bigger waves left us dry.” One can’t help but imagine these words are describing Sundodger’s career arc. Even though the band is relatively young, the shelf lives for rock & roll acts can be extremely short. It could also be about coming along at the wrong time. Perhaps the group is looking back to some of its sonic inspirations, such as R.E.M., and wishing it could have been around when rock & roll was more exciting. Back during R.E.M.’s heyday, college rock was the in thing. Bands were discovering alternate roots to success. The whole term of alternative rock was still new. These days, rock & roll is akin to one of music’s endangered species. Sundodger might have had a better chance of breaking through, back when rock & roll success stories were more prevalent.

At a time when Cardi B is the unworthy queen of pop, an earnest band like Sundodger must feel out of place. Those that appreciate its sincerity, though, will find a place for “Bigger Waves” in their hearts.