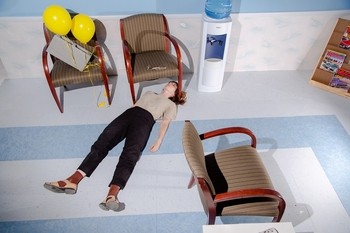 “’Pink’ deals with the passage of time,” explains Mothers lead singer and songwriter Kristine Leschper of their new song from upcoming sophomore album Render Another Ugly Method, coming out September 7 on ANTI- Records. “It describes a series of memories within cars – cars of my childhood, recent past, and present – and subsequent feelings of childlike removal and helplessness. The video aims to reciprocate these three vignettes of idling, through limited actions and minimalist set design divided into three parts.”

Now based in Philadelphia, Mothers originated in Athens, Georgia where Leschper was attending printmaking school. In 2016 they released their debut album When You Walk A Long Distance You Are Tired to great critical acclaim. Named a Stereogum ‘Band To Watch’, Pitchfork’s review of the album compared Leschper to Angel Olsen and Sharon Van Etten while Noisey exclaimed that the record “is singer-songwriter prog rock for grown up emo kids.”

“The first time I heard Mothers I knew it was a band that I wanted to work with,” said John Congleton (St. Vincent, Angel Olsen, The War on Drugs), who produced Render Another Ugly Method. “So special and idiosyncratic, it is impossible to ignore their point of view. I loved making the record and seeing them work.”