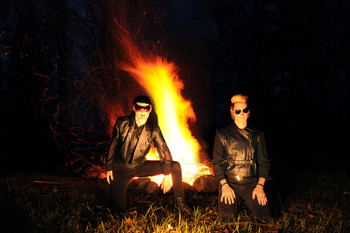 The album began as 23 demos written and recorded in a remote cabin in the woods of Northern Michigan during the dead of winter. In total isolation, and with a reduced amount of gear (a modified version of their live setup) on the cabin’s kitchen table, the duo were completely immersed in an incessant inescapable studio of their own making – looping, repetitive analogue sequences grinding away day and night. At the end of the intense demo session, a handful of peers were enlisted by the band for the difficult task of paring down the demos into the final album.

“It’s confounding how often we negate the importance of disconnecting, getting weird, getting lost. Discomfort and joy intertwined. Day to day, theatrical self-presentation set to rest in our frantic social world. Public becomes private, almost too private. Looking out into frozen woods as you deliver your vocals. For who? For what? Taking walks along icy shorelines as you try to overcome writer’s block, as you try to overcome yourself. Not seeing anyone for days and weeks on end. Overwhelming thoughts and feelings come rushing in; anxiety, fear, purpose, banality, futility of task, power structures, power struggles, pointlessness, collapse. You’re faced to face yourself. Your awareness is heightened. You are neither here nor there. You are in a liminal state. As you work in this isolated cabin your windows become mirrors.”