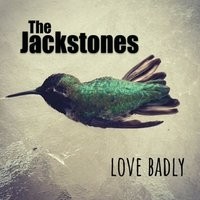 In their song “Cruise,” San Diego’s The Jackstones not only effectively set the tone for their new album Love Badly, but manage to balance the ferocity of a hard rocking garage band with the all the polish and professionalism of a studio seasoned country band. Sure, country rock is hardly a new genre or concept in the spectrum of popular music, but up until I listened to Love Badly, I wasn’t sure if it was a concept of any relevance to modern generations or not. The Jackstones have not only convinced me that there’s a place for country that turns the volume up past ten in 2018, but that it their sound could very well be a dominant influence over the future of the scene in the next decade to come.

Love Badly is freewheeling, cathartic music delivered without a lot of bucolic imagery or plaintive prose, which are two qualities that one comes to kind of expect when listening to country or country crossover pop these days. Ironically the lack of both doesn’t seem to keep The Jackstones from touching on very emotional, vulnerable territory with their lyrics and even dabbling in reflective introspection every now and again. There’s definitely a little more of alternative rock’s punk influenced irreverence in their sound in comparison to their contemporaries, but it only adds to their charismatic unpredictability that is so brilliantly exhibited in this twelve song collection.

As a critic, I tend to see a lot of trends in pop culture ahead of the curve, and there’s definitely more than enough evidence for us to come to the conclusion that positive, feel good songs are going to be the most lucrative and prominent in music once the 2020’s get into full swing. Audiences have been making it abundantly clear in the last couple of years that music steeped in negativity, self-indulgence and depression isn’t marketable in a time when people have already got more stress and anxiety in their day to day lives than they know what to do with. There isn’t any room for an additional drag on our collective spirit right now, and I think that The Jackstones are aware of this and tapping into the market with complete ease. Their brand of country isn’t self-righteous or ignorant, and their style of rock is hardly self-absorbed or rife with unoriginal recreations of outdated compositional formulas. What’s more, Love Badly isn’t an album that I feel like you have to think a lot about to really get into and enjoy, regardless of how casual or serious of a music fan you are (and that’s really saying something these days). I would recommend anyone who is intrigued by the idea of music that isn’t held to exist within a certain set of artistic or creative parameters check out Love Badly and The Jackstones’ body of work as a whole over the summer and see what they think for themselves. In my opinion though, you really can’t go wrong with what they’re cooking up for fans old and new alike in this fantastic new LP.