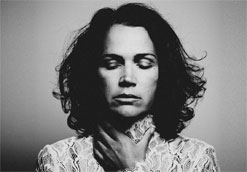 Some statement songs come on like a freight train – all bluster and force and moral indignation. Those are certainly fun to hear. But we’ve noticed that the ones that are really effective are more like whispers. They’re quietly persuasive: while they might not make you raise your fist, they speak directly to the heart. Songs that carry their messages with poise, we’ve noticed, are the ones that have staying power, even after all of the shouting is done.

VanWyck writes songs like that. The Amsterdam-based independent folk artist has got plenty to say, but she’s not going to resort to effrontery to get her point across. Instead, her statements are clothed in gorgeous layers of sound – and delivered in a voice heavy with experience, dignity, and weary beauty. An Average Woman, which was released this January to acclaim on both sides of the Atlantic, is a radiant album, dense with poetic observations and finely-crafted melodies. But don’t let its loveliness fool you: this set is a timely, nuanced feminist statement, and one that demands respect for all women.

“Red River Girl”, the latest single, is part of a cycle of songs that searches out voices that have been lost along the way: voices from everyday women who struggled and failed, from mythical heroines that have all but been forgotten, and from untold stories in our own pasts. All of the female narrators on the record demonstrate both vulnerability and strength, and VanWyck inhabits their perspectives with the ease of a trained character actress. It’s astonishing to think that this is her debut album – it plays like the work of a veteran recording artist. The music blog Imperfect Fifth was one of many to rave about An Average Woman: “the entire album is a keeper,” wrote the critic, noting its “key concepts about confidence, freedom, and being a damn badass as a woman.”