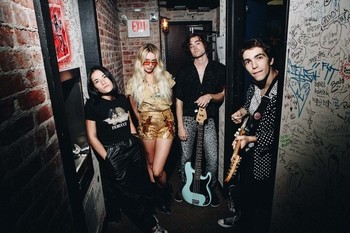 American four-piece RUSSO are on the fast track to becoming one of the most exciting bands to emerge in 2018. Their sound, a refreshing blend of ska-pop and rock, coupled with their sweat-infused, high-energy live performances, critics are quick to compare this California based band to the likes of No Doubt, Blondie and The Clash.

Today, RUSSO released their follow-up track and stellar video titled “Ghost.” Directed by Hamish Stephenson and shot during their North American tour this spring, “Ghost” is described by the band as “an emotional banger that deals with the complexities of being in a relationship with someone who has become a shell of themselves, a ghost,” and serves as the perfect taster of what’s to come from their forthcoming debut EP “House With A Pool” which drops worldwide on July 13.